Defying many doubters, Craig Tiley gazed into his crystal ball more than seven years ago and predicted this moment would come for Australian tennis. 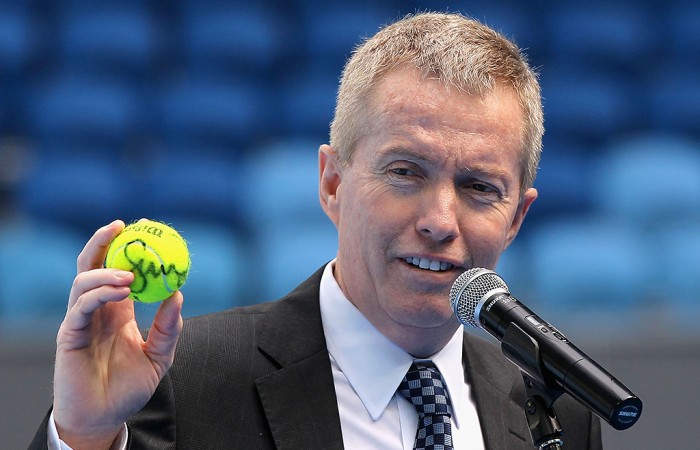 Defying many doubters, Craig Tiley gazed into his crystal ball more than seven years ago and predicted this moment would come for Australian tennis.

With a firm focus on ensuring elite juniors made a more successful transition to the professional ranks, Tiley mapped out a pathway to take Australian tennis back to the future.

He said it may take a decade, but TA’s then newly-appointed player development director was unwavering in his belief that Australia would again start producing potential grand slam champions.

Tiley wanted strength in numbers, like the glory days of the 1950s and 60s – and now he has that.

This week, the 28-times Davis Cup-winning nation has 13 players ranked in the men’s top 250 in the world, up from nine – a 30-year low – back in 2004, the year before South African-born Tiley was recruited from the US with a mandate to “re-design, re-organise and re-energise” the sport in Australia.

Most significantly, in a power-game era when men are peaking in their late 20s, eight of Australia’s 13 players in the top 250 are aged between 18 and 22.

While the new wave is led by new Australian No.1 Nick Kyrgios, the teenage sensation is supported by a raft of former junior grand slam winners and finalists including resurgent Bernard Tomic, Luke Saville and exciting 18-year-old Thanasi Kokkinakis.

Only time will tell if this week marked a changing of the guard as Australia’s two biggest names – veteran grand slam champions Lleyton Hewitt and Samantha Stosur – crashed out in the first round of Brisbane International while Tomic and Kokkinakis led eight compatriots into the last 16 of the men’s and women’s events.

Either way, Tiley – now TA chief executive – is seeing the rewards of his meticulous revamp of Australian tennis.

With a strong focus on improved coaching (and luring the likes of Tony Roche and David Taylor back into the fold) and an emphasis on making his staff accountable, Tiley implemented a fundamentally simple strategic plan designed to improve Australia’s fortunes.

In his words, Tiley inherited “a disorganised system which wasn’t very clear in what the objectives were or which direction it was going”.

In other words, TA’s previous administration had taken their eyes off the ball.

Consequently, an entire generation of potential champions was lost between the mid-80s, when Australia landed two Davis Cups and Pat Cash won Wimbledon, and the somewhat fortunate emergence a decade later of rare talents Pat Rafter, Mark Philippoussis and Hewitt.

That trio between them accrued two Davis Cups from four finals and four grand slam titles and six runner-up trophies.

But while Rafter, Philippoussis and Hewitt thrived largely on the back of natural ability, Australia’s current crop of emerging stars are mostly the results of TA’s careful nurturing and systematic planning.

Evidence that more of the country’s juniors are starting to make the transition to the senior ranks came last year at Wimbledon when Nick Kyrgios – who made the quarter-finals – along with Saville and James Duckworth helped make up Australia’s largest contingent at the All England Club since 2001.

Australia also enjoyed its best start at Wimbledon in 15 years with Tomic, Kyrgios and Saville among seven players to reach at least the second round.

In addition to the swelling numbers on the rise up the rankings, last September 17-year-old Omar Jasika won Australia’s eighth junior grand slam singles title of the Tiley era at the US Open.

Tiley, though, is not done yet.

“We always recognise we still have a long way to go,” he told AAP.

“We are certainly seeing the programs put in place from 2005-2006 starting to bear fruit and it’s a great platform to build on.

“None of us are kidding ourselves that the job is done.”

AUSTRALIA’S TENNIS PLAYERS IN THE TOP 250 (AGES IN BRACKETS)