Jarmila Gajdosova is the only Australian female remaining in the Brisbane International after her fellow imports Daria Gavrilova and Ajla Tomljanovic both lost on Tuesday. 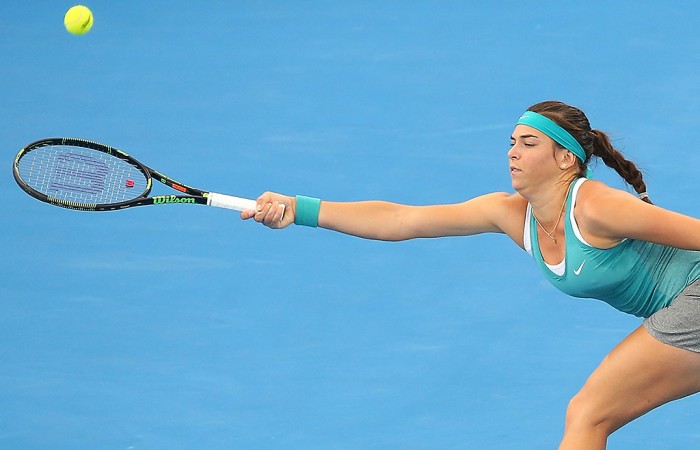 Tomljanovic, the Croatian-born Brisbane resident, fell 6-3 6-2 in her second round match against Ukrainian Elina Svitolina on Tuesday.

The 21-year-old was playing her first tournament since moving to Brisbane in November and quickly gathered a following with her straight sets first round upset of ex-world No.1 Jelena Jankovic.

But she was unable to repeat her heroics on Tuesday, making a whopping 35 unforced errors in the match to fall to the world No.28.

Despite the loss, the world No.63 walked away from the tournament beaming.

“It’s really a joy to play in front of this crowd,” she said.

“I could have given her a better fight.

“It’s the start of the season so I’m not going to get too down on myself.

“Tomorrow is a new day, and just got to work harder.”

The world No.9 was too good for another naturalised Australian, Russian-born Daria Gavrilova.

In a tournament where four of the eight women’s seeds have already been eliminated, Kerber reached the last eight with a 6-3 7-5 win.

Kerber says playing as many matches as possible before this month’s Australian Open is her aim.

“It’s good to have a lot of matches because we had a long break,” Kerber said.

“The key is to have good matches, tough matches, before the first grand slam of the year.”

Like Tomljanovic, Gavrilova must fly the flag of her birth nation at Women’s Tennis Association events until she officially becomes an Australian citizen.

But the pair will be recognised as Australian for grand slams, including this month’s Australian Open in Melbourne.

A former junior world No.1, Gavrilova says every event in her new homeland is helping to justify her decision to switch nationalities.

“Just feeling Australian and feeling like everyone is supporting me, it’s very great,” Gavrilova said.

The defeats to Gavrilova and Tomljanovic and Sam Stosur’s embarrassing first-round exit mean Slovakian-born Gajdosova is the only Australian left in the women’s draw.

She’ll face world No.5 and second seed Ana Ivanovic in a second round match on Wednesday evening.

Top seed Maria Sharapova makes her first appearance of 2015 in the second round later on Tuesday against Kazakhstan’s Yaroslava Shvedova.