Naiktha Bains has beaten fellow teen Maddison Inglis in a compelling three-set affair on Friday to round out the women's semifinalists at the Australian Open 2015 Play-off. 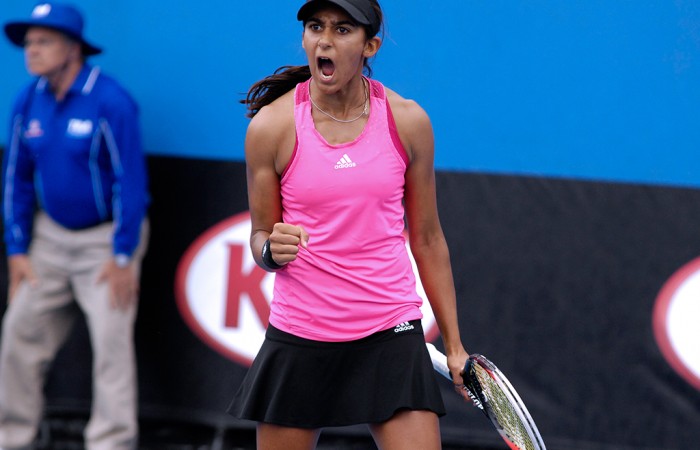 Naiktha Bains has beaten fellow teen Maddison Inglis in a compelling three-set affair on Friday to round out the women’s semifinalists at the Australian Open 2015 Play-off.

With scores tied at a set apiece on Thursday before rain forced the postponement of the match, Bains proved the more consistent and intense of the 16-year-old wildcard duo, snatching a 3-6 6-0 6-3 victory.

The win sends her through to a final-four showdown with fourth seed Arina Rodionova; the other semifinal pits Olivia Rogowska and Daria Gavrilova – the first and third seeds respectively – against one another.

Having in the first round beaten second seed and Arina’s sister Anastasia, Bains said she was looking forward to a shot at another win over a Rodionova.

“They’re sisters so they’re probably going to be talking, but that doesn’t bother me. I’ll just take it as (another) match – it doesn’t really matter who I’m playing. So yeah, (I’ll) try and beat them both,” she laughed.

Bains had been playing excellent tennis to storm through the second set, but said she didn’t feel disrupted by the overnight suspension of play.

When the match resumed in the third set on Friday it progressed game for game, with both players producing a high level that begat several searching rallies.

The contrast in styles was an attractive one; Bains, stronger on the forehand and with more shape on her shots, was countered by Inglis’ strength off the backhand wing and flat, relentless ball-striking.

And as Inglis went about her business in her reserved manner, Bains vocally urged herself on.

“I was pretty fiery that (third) set … she plays within herself, doesn’t really show much emotion, whereas I like to, so I think that helps, gets under people’s skin sometimes,” she laughed.

After being so difficult to separate, Bains was the player to draw first blood, her willingness to mix up the play with strategic moonballs and slices proving effective.

Having staved off several break points herself, she broke Inglis in the eighth game as the West Australian became error-prone and frustrated.

Serving for the match, Bains benefitted from four consecutive Inglis mistakes to wrap up victory.

“I managed to come up with some big serves to save (break points) and did what I needed to do on those points … my serve helped me out I think,” she reflected.