Boys' 16/u top seed Blake Ellis and No.1 seed in the girls' 12/u event, Olivia Gadecki, both advanced on Wednesday at Melbourne Park following straight-sets wins. 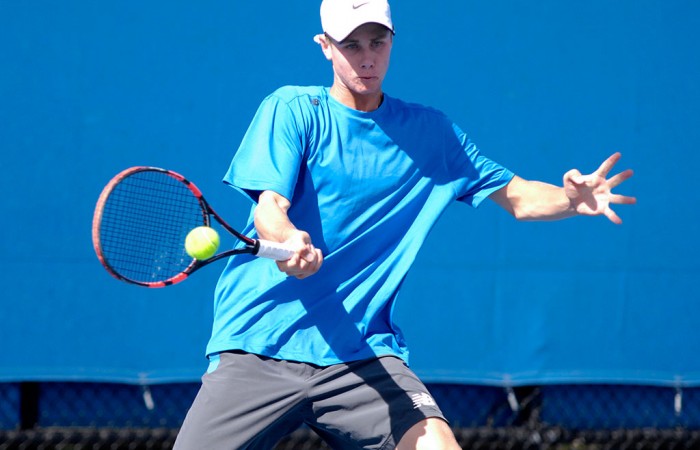 A sunny day at Melbourne Park on Wednesday saw the top seeds in the boys’ 16/u and girls’ 12/u Australian Championships advance with little fanfare.

Queensland’s Blake Ellis continued the kind of form that saw him reach the 18/u quarterfinals, dispatching Blake Clarke 6-3 6-4 in 16/u action while Olivia Gadecki – also from Queensland – defeated Lauren Nikoloski 6-2 6-0 in the 12s event.

Dominating the play with his powerful serve, Ellis looked in control throughout the match, and afterwards seemed happy with his level.

“I thought I played pretty well,” he said. “At the moment I think I’m serving well and that’s definitely a strength.”

On the back of his recent performances, the top seed is looking like the player to beat this week.

“If I can win it that would be great but I’ll just do the best I can,” he said.

The fifth seed from NSW – who also competed in the 18s last week – said he felt like he was starting to get on top of his game.

“I feel like I’m hitting it pretty clean and pretty well,” he said. “I’m happy with the win.”

Fellow New South Welshman Alex De Minaur had a more difficult time of it, but eventually came from a set behind to secure a victory over Victorian Mike Vaughan 3-6 6-3 6-2.

The seventh seed has been described as having excellent court craft and a bit of “x-factor”, and on the road back from injury, he needed every ounce of it today.

“It was tough, I haven’t played for a while and it was my first match back,” he said.

“I had to try and get going a little bit. But in the end, it doesn’t matter how you win, even if you’re scrambling a bit.”

In the girls’ event, fifth seed Kaylah Mcphee and No.6 seed Jaimee Fourlis enjoyed comfortable victories in progressing to the second round.

Gadecki moves on in girls’ 12/u event

Last year’s 12/u runner-up, Olivia Gadecki, said a walkover on Tuesday in the first round was very welcome after an intense few weeks of tennis.

“It came me a chance to recover a bit,” she said.

It certainly seemed to pay dividends as she defeated Lauren Nikoloski on Wednesday 6-2 6-0 to secure her place in the last 16. The top seed from Queensland was just a little too powerful off the ground for her West Australian opponent.

“I’m playing pretty well at the moment,” said Gadecki, who also advanced to the third round of the 14/u event last week, losing to eventual runner-up Violet Apisah.

Meanwhile, third seed Annerly Poulos continued her excellent form, winning her second straight match 6-0 6-0 – this time over Eilis Kruger – to advance to the third round. She was joined in the last 16 by No.2 seed Monique Barry and fourth seed Krystal Clarke, who both moved on following straight-sets wins.

> check out more results from the 12/u Australian Championships