Anja Dokic on a roll

West Australian qualifier Anja Dokic upset seventh seed Petra Hule in the 18/u Australian Championships round robin stage to progress to the knockout stage of the competition. 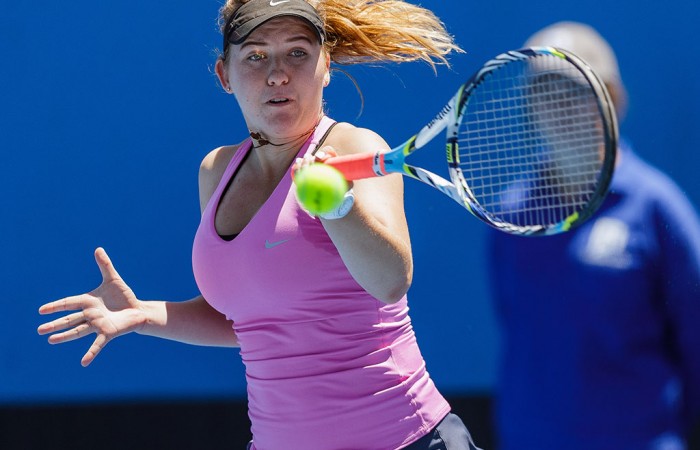 West Australian qualifier Anja Dokic has made short work of seventh seed Petra Hule in the final day of the round robin stage in the 18/u Australian Championships, completing her victory in straight sets 6-3 6-1.

The 17-year-old looked in fine form and from the opening minute took things right up to Hule, who on Tuesday toppled the first seed in the event, Kimberly Birrell.

“It felt pretty good. I had a good day yesterday and I just tried to continue that,” Dokic said courtside.

“I beat [Hule] here last year as well so I think I know her game pretty well.”

Having now added to her victory yesterday over Tasmanian wildcard Catherine Krueger, Dokic has secured her place in the eight-player, knockout championship stage of the draw.

> view the girls’ 18/u championship draw

In other girl’s 18/u action on Wednesday at Melbourne Park, Birrell avenged yesterday’s loss to Petra Hule with a 6-0 6-2 win over Krueger, while qualifier Alicia Smith continued her solid run at Melbourne Park, defeating eighth seed Chloe Hule 6-2 6-2.

In the boys’s event, there were straight-sets wins to top-seeded trio Harry Bourchier (No.1), Marc Polmans (No.2) and Daniel Guccione (No.3), each of whom progressed to the quarterfinals.

Fourth seed Daniel Nolan went down in straight sets to No.6 seed Mitchell Robins, but still managed to secure his place in the championship stage of the event.

> check out the boys’ 18/u championship draw