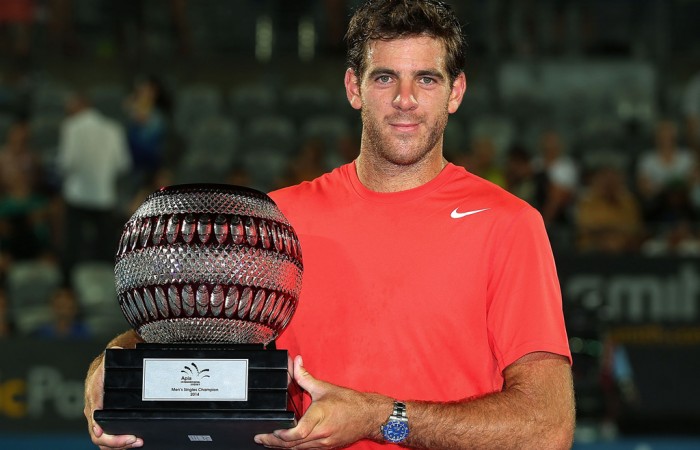 The 2009 US Open winner has been granted a wildcard entry and will start as the tournament favourite, despite a tough year on tour with injuries.

“I love playing in Sydney. The city and the fans are great and I can’t wait to come back and defend my title,” said del Potro.

“Last year I played some of my best tennis there and it is the perfect way to start the year.  I am looking forward to being back in Sydney as it is one of my favourite cities to play.

“I remember there were a lot of Argentine fans who came out to support me which was amazing.”

The heavy-hitting del Potro has a protected world ranking of No.7 but this can only be used at a limited number of tournaments and he has opted to take a wildcard in Sydney.

The tournament’s top seed will be the fiery Italian Fabio Fognini (No.20), while the second seed will go to 23-year-old David Goffin (BEL), the world No.22 and 2014 Comeback Player of the Year who burst onto the international scene in 2012 when he made it to the fourth round of the French Open as a lucky loser.

They will be joined by local hopes Nick Kyrgios, the Wimbledon quarterfinalist and 2014 Newcombe Medal winner, and 2013 champion Bernard Tomic.

On the women’s side of the draw, an incredible 22 of the world’s top 30 players will head to Sydney Olympic Park Tennis Centre to compete in what is one of the strongest fields in the tournament’s history.

Kvitova, who capped an outstanding 2014 by guiding her Czech Republic team to victory in the Fed Cup, is one of three Grand Slam champions in the women’s field, with local favourite Sam Stosur (AUS) and Svetlana Kuznetsova (RUS) also in the line-up.

“We have made multiple changes to our event in 2015 and are thrilled we are able to complement these with another world class line-up of stars,” he said.

“We’ll be welcoming back one of the most popular players we’ve ever had in defending champion Juan Martin del Potro and our women’s field this year is one of the strongest you will see outside a Grand Slam.

“To have Australia’s own rising star Nick Kyrgios, one of the most talked about players on tour at the moment, as well as Sydney favourites Bernard Tomic and Sam Stosur is another coup.

“To also welcome six of the greats to compete in our Legends event, including the incomparable John McEnroe and Pat Rafter, is a fantastic result for the tournament and incredibly exciting for Sydney tennis fans.”