Stars step out in style on the blue carpet

One of the undeniable highlights of the Newcombe Medal is seeing Australia's best players step out on the blue carpet, having traded their tennis clothes for their finest evening wear. 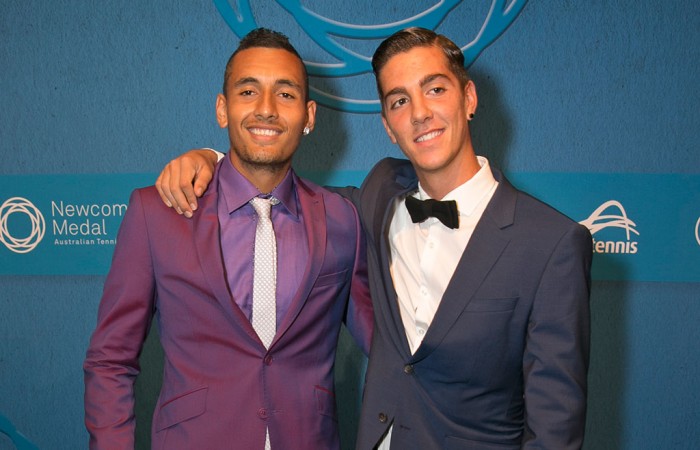 The Newcombe Medal, Australian Tennis Awards brings together the Australian tennis community to honour and celebrate the achievements in – and contributions to – the sport each year.

But one of the undeniable highlights of the night is seeing the stars of the game step out on the blue carpet, having traded their tennis clothes for their finest evening wear.

The glittering Palladium Ballroom at Melbourne’s Crown Entertainment Complex provided the perfect setting for Australia’s top tennis players – and their partners and family members – to showcase their stylish side.

Among the first arrivals on the blue carpet before a sizeable media contingent were “Special Ks” Nick Kyrgios and Thanasi Kokkinakis, the teenage talents adding a colourful twist to the black tie theme.

“It’s just good to see everyone in (something) other than tennis clothes. Everyone’s dressed up and it’s a different look,” Kokkinakis, donning a navy Hugo Boss suit, told tennis.com.au.

“I’ve seen (this style) around, and I thought yeah I might try this out. I’ve always worn the black suit and thought I’d be a little bit different and decided to go the blue with the brown shoes.”

Kyrgios, in a purple Ted Baker suit, said he knew the majority of those at the Newcombe Medal would be fitted out in black, and wanted to spice things up.

“I was in contact with Thanasi and we both knew we were gonna be looking pretty schmick tonight,” he laughed, “so when I saw him tonight I wasn’t surprised at all.”

The boys were followed onto the blue carpet by Arina Rodionova and Ty Vickery, a sporting couple returning to the Palladium Ballroom for the second time this year after 264th-ranked Rodionova accompanied Vickery – a Australian-rules footballer playing for the Richmond Tigers – to his club’s Jack Dyer Medal.

“Yeah it’s a bit different. Obviously this is Arina’s night with all of her friends and fellow athletes here, but it’s good, it’s a great celebration for the end of the sporting year for them,” Vickery said.

Rodionova, dressed in a vibrant orange Carla Zampatti dress, said it was great be back among familiar faces in her home city after spending much of the year on the road.

“The food is beautiful and the company is always amazing and it’s good to see all my friends in the one place … I’m just looking forward to a good night,” she said.

Along came more couples, including young Aussie tennis couple Luke Saville and Daria Gavrilova – both hitting their best form in 2014 despite injury struggles – and Sam Groth and partner Brittany Boys.

Boys looked resplendent in a white Thurley dress, a Stephanie Browne bracelet, necklace (also by Thurley) and Mimco accessories. “I’m a massive fan of white, obviously during the Australian summer as well, it’s always good to show off a nice tan,” she said.

She was also impressed that Groth embraced the preparation for the Newcombe Medal, which saw him join several of his female compatriots in getting his hair styled ahead of the awards.

“He prides himself on how he looks, especially for functions such as this,” Boys said.

“I mean, he’s a good looking man, and to get his hair down like that was definitely an effort but they pulled it off (laughter), they did a really good job and he just looks fantastic tonight.”

After Newcombe Medal finalist Lleyton Hewitt and wife Bec captivated the cameras, soon it was Australia’s leading ladies’ turn to shine on the blue carpet.

Dellacqua, who wore a red lace creation in 2013, changed things up with a blue floor-length dress for this year’s awards.

“I didn’t know there was going to be a blue backdrop so I probably camouflaged myself,” she laughed.

“I went for a bit more bling this year, just wanted to sparkle it up. Not too much into design and stuff, but picked what looked good, and decided that looks better than a tennis dress so I’ll put that on!”

And with that, the Aussie tennis fraternity made its way into the Palladium Ballroom, buoyed by the promise of a night to celebrate Australian tennis and excited to see who would come away with the ultimate prize.