Nick Kyrgios' stunning 2014 season has been iced with his nomination as a finalist for the Newcombe Medal. 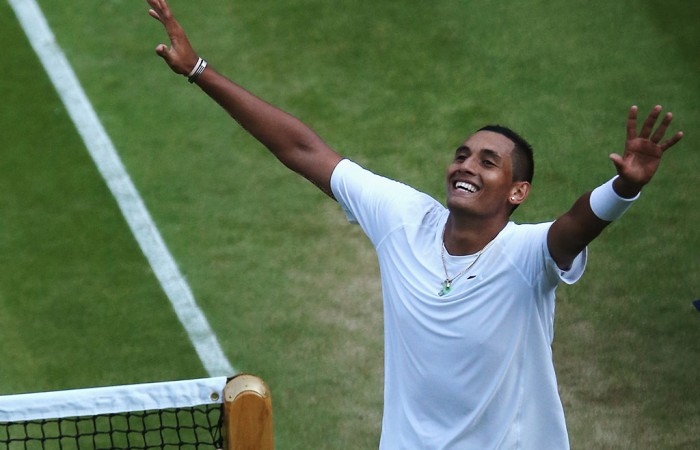 Nick Kyrgios’ stunning 2014 season has been iced with his nomination as a finalist for the Newcombe Medal.

The 19-year-old, who shot to prominence with his defeat of world No.1 Rafael Nadal en route to the Wimbledon quarterfinals, is a Newcombe Medal finalist alongside fellow Aussies Lleyton Hewitt, Sam Stosur and Casey Dellacqua.

The award recognises Australia’s most outstanding elite tennis player of the year.

“I’m really excited to be nominated for the Newcombe Medal, it’s been a huge year for me and this really caps it off,” Kyrgios said.

“The previous winners, Sam and Lleyton, are stars of Australian tennis and it’s amazing to be in their company. I’m really proud of what I’ve been able to achieve this year and I’m already looking forward to 2015 and hopefully another big season ahead.”

His quarterfinal run at Wimbledon was not only significant because of the Nadal result; earlier in the tournament, he saved nine match points to upset 13th seed Richard Gasquet in the second round.

Earlier in the season, he had dazzled crowds with his performance in a five-set epic in the second round of the Australian Open against Benoit Paire, and boosted his ranking in the ensuing months with ATP Challenger titles in Sarasota, Savannah and Nottingham.

Kyrgios continued to thrived at Grand Slam level as the year progressed, reaching the third round of the US Open after beating higher-ranked foes Mikhail Youzhny (the 21st seed) and Andreas Seppi.

He also helped Australia maintain its place in the elite 16-nation Davis Cup World Group with victories in his singles rubbers against Uzbekistan in September.

Got a fan question for Nick? Send it to us on Twitter using the #Newks14 hashtag and watch the live stream on the night of the Newcombe Medal to see if he answers it!