UPDATE: Casey Dellacqua's career-best season in 2014 has seen the 29-year-old honoured as a finalist for the prestigious Newcombe Medal. 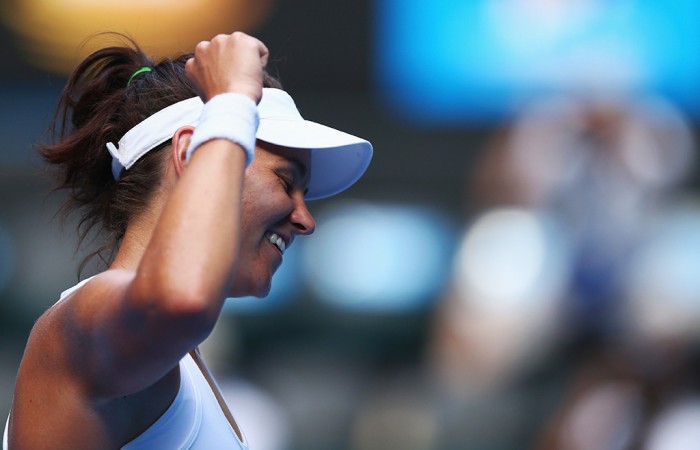 Not too many players produce their career-best season at age 29.

In fact, it’s an age when many players are starting to wind back their careers rather than making impressive strides into unchartered waters.

Casey Dellacqua began season 2014 as the world’s 142nd player, but cracked the top 30 for the first time – peaking at world No.26 – after an exceptionally consistent season highlighted by Grand Slam success.

These milestones have helped her be nominated as a finalist for the Newcombe Medal alongside Sam Stosur, Lleyton Hewitt and Nick Kyrgios; the medal is awarded to Australia’s most outstanding elite tennis player for the year.

“It is a great honour to be nominated for the Newcombe Medal. Newk is a legend of our sport in this country and it is exciting to be a finalist,” she said.

“I feel like I’ve had a good year. It’s hard to pin down a highlight, but making the fourth round of both the Australian and US Opens was great. It was also amazing to play singles on Centre Court at Wimbledon (in the second round).

“The night promises to be a really enjoyable one and it is a great celebration of Australian tennis over the past 12 months. Lleyton, Nick and Sam have all had great years also, so whoever wins on Monday will be very deserving.”

Dellacqua’s achievements in 2014 stack up very well against her fellow finalists.

Her run to the fourth round at Melbourne Park as a wildcard was followed by an appearance in the last 16 at the US Open, her best ever performance at Flushing Meadows.

And there was plenty of success at WTA events around the globe as well. She enjoyed a semifinal finish at the Premier-level in Birmingham – her best ever WTA result – as well as quarterfinals at Indian Wells and Tokyo.

A third-round finish in Wuhan helped push her to a career-high ranking of 26th in September.

Throughout the season she enjoyed wins over higher-ranked opponents such as Stosur, Sabine Lisicki, Anastasia Pavlyuchenkova, Kirsten Flipkens and Roberta Vinci, and combined with compatriot Ash Barty to win the doubles title in Strasbourg and final in Birmingham.

Her results were recognised by the women’s tour, which nominated her for the WTA Most Improved Player Award for 2014.

Got a fan question for Casey? Send it to us on Twitter using the #Newks14 hashtag and watch the live stream on the night of the Newcombe Medal to see if she answers it!