Lleyton Hewitt will attempt to win the highest individual honour in Australian tennis for the second straight year at Monday night's Newcombe Medal. 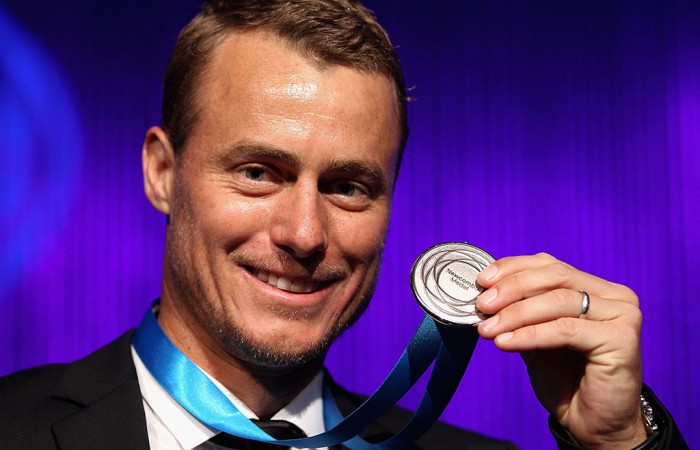 Lleyton Hewitt will attempt to win the highest individual honour in Australian tennis for the second straight year at Monday night’s Newcombe Medal.

Hewitt is a finalist for the Newcombe Medal – which recognises Australia’s most outstanding elite tennis player for the year – alongside Nick Kyrgios, Sam Stosur and Casey Dellacqua.

The 33-year-old completed a fine season in 2014, winning two ATP titles to take his career tally to 30; it was the first time in 10 years that he had won multiple titles in a season.

The first came at the Brisbane International in January, a stunning result that saw him beat Roger Federer in a classic three-set final played before a packed Pat Rafter Arena.

Six months later he stormed to the title on grass at Newport, Rhode Island, upending nemesis Ivo Karlovic in a third-set tiebreak.

Hewitt also reached the quarterfinals in Memphis and the third round in Washington DC, and remained entrenched in the top 50 for most of the year.

“It’s always a huge honour to be nominated for this award and to be recognised for the effort you put in all season,” he said.

“I was really proud to win the Newcombe Medal last year and it was a great moment to have Newk present the medal. Newk is someone I‘ve always looked up to, we shared a lot of great experiences when he was Davis Cup captain, including our win in 1999, and I’ve been fortunate to learn a lot from him and to consider him a friend and mentor throughout my career.”

Indeed, Hewitt continued to thrive in the team competition, helping Australia retain its place in the Davis Cup World Group with a singles victory over Farrukh Dustov in a Play-off tie against Uzbekistan in Perth.

Got a fan question for Lleyton? Send it to us on Twitter using the #Newks14 hashtag and watch the live stream on the night of the Newcombe Medal to see if he answers it!