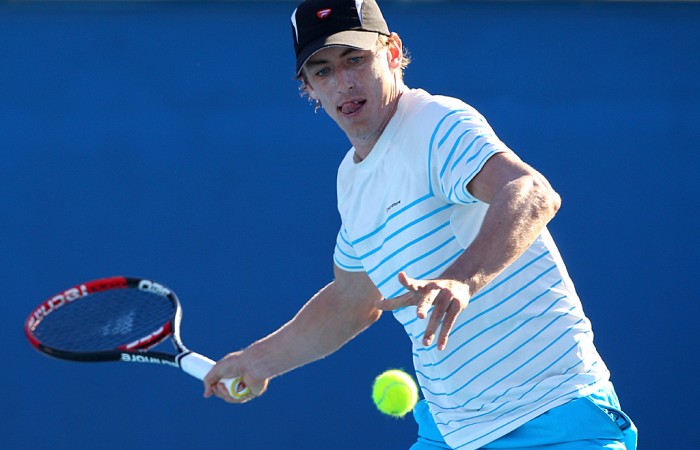 Queensland’s John Millman has taken less than an hour to book his place in the final of the second 2014 Latrobe City Traralgon ATP Challenger with an emphatic 6-1 6-2 victory over countryman and sixth seed Luke Saville on Saturday.

“It’s never easy at this level but I set the tone early and held on to the momentum throughout the match,” Millman said.

“I played good tennis today. I’m happy with that.”

Millman now meets second seeded Brit James Ward, who continued his solid run this week with a straight sets victory over Ben Mitchell. The Gold Coaster went toe-to-toe with Ward in the first set but, after being broken late, found himself on the back foot and unable to recover, going down 7-5 6-2.

Prior to Traralgon, he reached the final of an ATP Challenger event in Tiburon (losing to Sam Querrey) and posted quarterfinal and semifinal appearances in the Napa and Sacramento Challengers respectively.

These successes have propelled him over 900 places in the ATP rankings to his current position of World No.278.

Still shy of his career high mark of No.126, achieved in April 2013, the 25-year-old is feeling good about his prospects of returning to that level and beyond.

“I’ve only been back properly for about two months and the shoulders gone from strength to strength,” Millman said. “I feel like I’m back to a pretty high level and consistently putting together some decent performances.

“It’s definitely tough when you’re out for that long. You basically have to start from scratch. It’s been a long road.”

“I feel like I’m playing well enough to win these kinds of tournaments and now I’ve put myself in a position to do so,” he said.

Millman has met Ward once before – at the 2012 Bangkok ATP Challenger – a match in which he prevailed in three sets.

“It was a battle,” he recalled. “But a lot of time has passed since then.

“James has jumped up the rankings. He’s playing some really good tennis right now and being just outside the top 100 he has a lot to play for coming into the summer.

“Hopefully I can play well out there and get through it.”