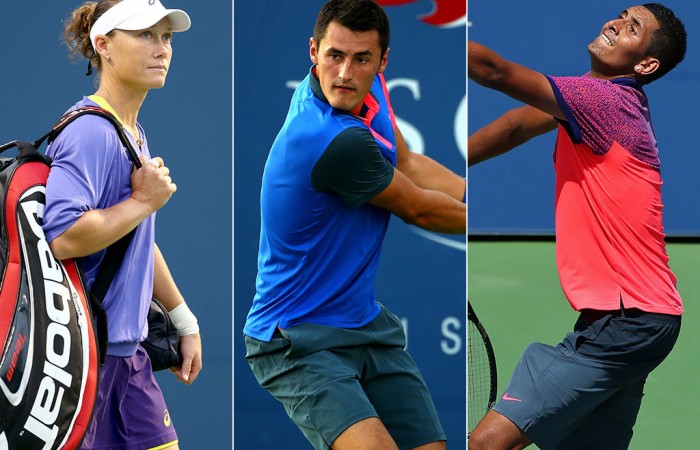 After a record breaking season in which he toppled then world No.1 Rafael Nadal at Wimbledon to reach the quarterfinals, Kyrgios will be seeking his first title at a tournament that has traditionally been a happy hunting ground for Australia’s best.

“I can’t wait to play in Sydney, I think the twilight sessions and the atmosphere that creates will suit my style of play,” said the world No.55.

“I’ve heard great things about Sydney fans and being so close to my home in Canberra I’m looking forward to having that local support. I know many Australian’s have won here before and I’ll be doing my best to add my name to the trophy.”

In the women’s draw, Australian No.1 Stosur will start as the local favourite in what promises to be another stacked women’s field.

The 30-year-old Queenslander, currently ranked inside the world’s top 20, captured her sixth WTA title last week in Osaka and has great memories of playing in the Sydney event.

“It’s a great tournament and I spend a bit of time there in December practicing so I’m pretty used to the courts and conditions,” Stosur said.

“It’s close to home and it’s a nice chance to play again in Australia in front of a great crowd.”

Joining Kygrios in the men’s draw will be 2013 champion and last year’s finalist Tomic. The Queenslander started 2014 with a bang, returning to the Apia International Sydney final where he went down in front of a record crowd to then world No.5 Juan Martin del Potro.

With injuries on the mend, the 21-year-old is aiming to rise back into the world’s top 30 and add another Sydney title to his resume.

“[Sydney] brings back a lot of memories. This year I was feeling much more confident and managed to get through to the final. It was amazing playing under the feeling of defending your title,” said Tomic.

“I enjoy the city so much, the tournament is very, very good so if I can bring something different this year it would be a huge bonus for me and I’d really like to win it again.”

Securing three of the most popular players in Australian tennis was a massive coup for both the tournament and Sydney tennis fans, said Apia International Sydney Tournament Director Alistair MacDonald.

“We’re thrilled to be able to bring Nick, Bernard and Sam to the Apia International Sydney this summer. Nick is one of the most exciting players on tour at the moment and Bernard obviously has a great history here in Sydney,” said MacDonald.

“Sam loves playing here and this will be her ninth appearance at the tournament. She’s hugely popular with the fans and we’re excited to have her back.”

“We see every year that Australian’s love watching their local heroes, and these are three of the biggest stars in Australian tennis. Both men’s and women’s fields are shaping up to be as strong as ever and we hope Sydney fans will once again get out and support the Aussies.”

The high profile trio of current Aussie stars will be joined by Davis Cup Captain Pat Rafter who will play an exhibition match before the men’s singles final as part of the new Sydney Men’s Legends event. Rafter’s opponent will be announced shortly and is set to make the final night of the event one not to be missed.

Apia International Sydney 2015, proudly supported by Apia in association with Volkswagen, will take place at Sydney Olympic Park Tennis Centre from 11 to 17 January 2015.