Australia’s newest Grand Slam champion has returned home keen to tackle bigger challenges as his career transitions from the junior to senior ranks. 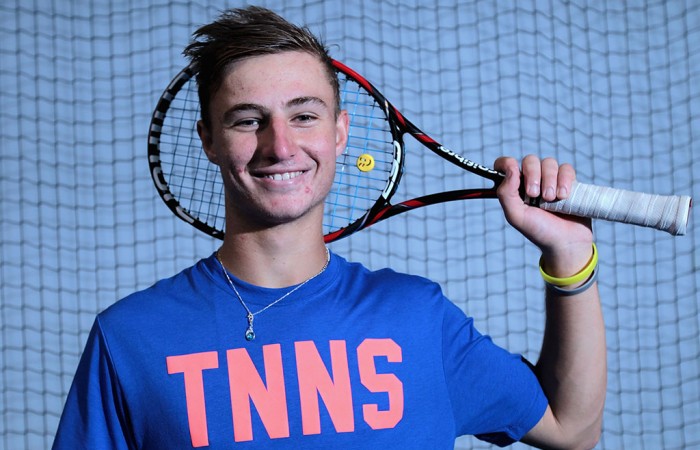 Australia’s newest Grand Slam champion has returned home keen to tackle bigger challenges as his career transitions from the junior to senior ranks.

Omar Jasika enjoyed a stunning week at Flushing Meadows in New York recently, becoming the first player in 28 years to scoop the junior singles and doubles titles at the US Open.

The fact that he did so having never advanced beyond the third round of a major event, while ranked outside the top 20, made it all the more sweet.

“It’s been extraordinary. What can I say? One of the best weeks of my life,” the 17-year-old of Bosnian heritage assessed.

Jasika – pronounced YAS-i-ka – spoke to the media at Melbourne Park’s National Tennis Centre (NTC) on Tuesday as he trained ahead of his appearances on the Australian Pro Tour, a circuit of ITF events played in regional events across the country throughout October and November.

He hopes to leave behind the junior tour and increasingly focus on such tournaments as he continues on his impressive developmental path.

Despite the large media throng that greeted him at the NTC, he said he paid little attention to the pressure that would inevitably accompany his Grand Slam-winning feats.

“I just try to stay relaxed and I try not to think about that too much,” he explained.

“I’m obviously going to somehow get it into my head … the more relaxed I am, the more it will settle down I guess by itself.”

It was this uncluttered mindset that paid dividends in New York.

Jasika beat three top-eight seeds en route to the US Open boys’ singles title, recovering from a set and a break down in the final to beat highly-touted French player Quentin Halys, seeded fifth.

“I just went into every match thinking step by step, game by game. And after I won a few matches I started to think more about the upcoming matches and what I had to do – not change too much, and just fight and stay in the match,” he reflected.

“That was a big thing for me.”

Thankfully for Jasika, the pressure that comes from success on the big stage is not solely focused on him.

The youngster is the latest in a succession of Australian boys’ junior Grand Slam champions who have emerged in recent years, an impressive group of talent featuring Bernard Tomic, Luke Saville and Nick Kyrgios and also including twice major finalist Thanasi Kokkinakis.

Having this group of compatriots to look up to – as well as evenly shoulder the pressure of Australian hopes – has had a positive impact on the Victorian.

He notes that Kyrgios has been especially influential. “He was sending me a few messages and he came out to my second round match (at the US Open). He obviously helped me a lot,” Jasika said.

“Nick’s a good friend of mine and he kind of helps me with his tips and gives me some more things to do which is a big thing.”

With a good group of role models around him and the burden of pressure somewhat reduced, Jasika is free to concentrate on his game. According to coach Liam Smith, it is one that stands him in good stead for future success in the professional ranks.

Smith, who has been working with the Melburnian since January 2013, believes Jasika’s left-handed style and good feel for the ball – allowing him to create unique shots and angles – presents an unorthodox dynamic for opponents, as does the speed with which he plays. Smith also highlights the teenager’s tactical nous – his natural ability to read the game and make adjustments – as another asset.

Adds Jasika: “I’d probably say I’ve got an all-court game. I like to come to the net which is a pretty good thing to do as well. I guess my game being a lefty and being fast around the court is a big advantage.”

He will get a chance to test those weapons against seasoned professionals in just a few weeks when he heads to Alice Springs, the first of several Pro Tour events.

Those competitive outings, and the training in preparation for them at the NTC, represent what Jasika simply loves to do.

“I enjoy playing tennis. When I was little I always wanted to be a professional tennis player,” he said.

“It’s been my dream and hopefully I can get there one day.”