Jasika into US Open junior semifinals

Australian Omar Jasika has continued his stunning run at the US Open by winning through to the semifinals of the boys' singles event. 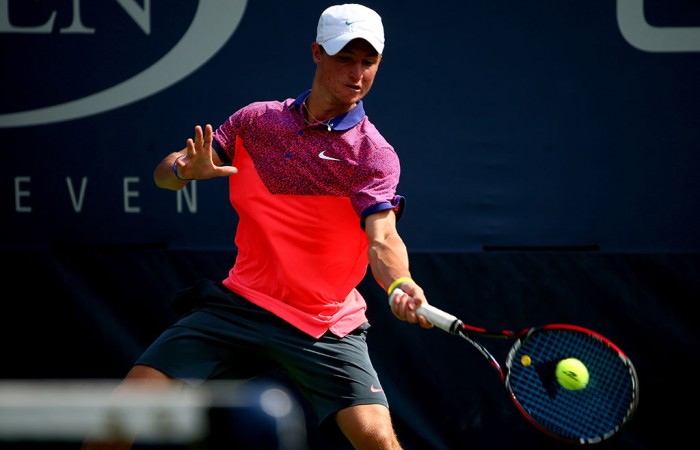 Omar Jasika is the latest talent to emerge from Australia’s production line of junior tennis stars after storming into the semifinals of the US Open boys’ singles as well as the doubles decider.

The unseeded 17-year-old from Melbourne continued his giantkilling run at Flushing Meadows on Friday with a 6-4 7-5 quarterfinal win over Korean seventh seed Duckhee Lee.

The victory came a day after he ousted American third seed Jared Donaldson – who has an impressive men’s ranking of No.303 in the world – in straight sets in the third round.

“It’s actually been my first time in New York so it’s been a good week so far,” Jasika said.

The teenager has a golden opportunity to qualify for his maiden Grand Slam junior final – and follow in the footsteps of Bernard Tomic, Nick Kyrgios and Thanasi Kokkinakis – when he meets Germany’s unseeded Jan Choinski in the semis on Saturday (Sunday AEST).

“I’ve played him before in South America and lost in three sets. It was a long match,” Jasika said.

“It’s definitely going to be a good match tomorrow. He’s got a big serve, so I’m going to have to try and hold my serve and keep composed.

“I think I’m getting mentally stronger and physically stronger, which is kind of helping.

“It’s my first (Grand Slam) semi, which I’m pretty happy with. I’ll just try and keep pushing forward and see how far I can get to. Maybe if I win it or get to a final, both are still great.”

Australia has produced five junior major champions in the past six years, including Tomic and Luke Saville, who both won two boys’ singles titles.

Tomic won in New York in 2009 as a 16-year-old and Kyrgios reigned in Australia last year, while Kokkinakis made both the singles and doubles finals at Flushing Meadows in 2013.

Jasika has the chance to at least match Kokkinakis after already reaching the final of the US Open doubles.

Backing up from his singles match, Jasika and Japanese partner Naoki Nakagawa beat Italy’s Filippo Baldi and Austria’s Lucas Miedler 6-2 1-6 [13-11] in the semifinals.

“It feels pretty good to be honest, winning matches and just playing for Australia,” Jasika said.

Aussies in action on Day 13