Dellacqua poised to become Aussie No.1

Casey Dellacqua will cherish being a mother again before returning to the tennis court to hunt down Sam Stosur's Australian No.1 ranking. 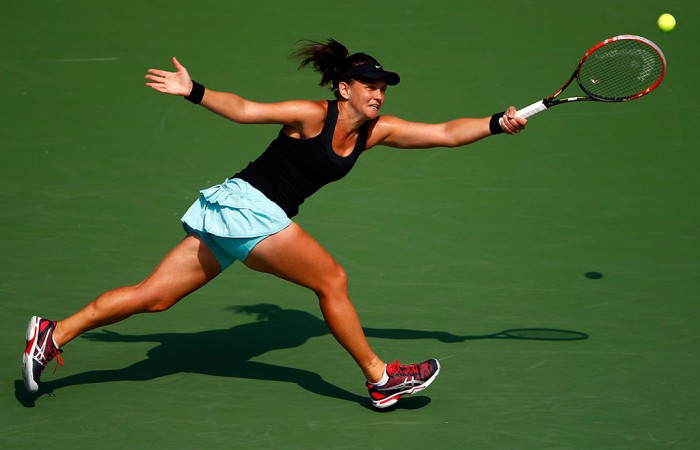 Casey Dellacqua will cherish being a mother again before returning to the tennis court to hunt down Sam Stosur’s Australian No.1 ranking.

Dellacqua left Flushing Meadows on Monday wondering what might have been after world No.12 Flavia Pennetta ended her bold bid to reach her maiden grand slam quarterfinal at the US Open.

Pennetta put paid to Australia’s singles interest for another year with a 7-5 6-2 fourth-round victory that left Dellacqua lamenting her inability to convert a chance to take the fiercely contested opening set.

With a dream last-eight shot at world No.1 and titleholder Serena Williams at stake, Dellacqua allowed Pennetta to hold serve from 15-30 and 4-5 down while under intense pressure to stay in the set.

“I’m obviously disappointed for that loss, but overall I’m happy with where I’m heading,” Dellacqua said.

“The tennis I’ve played, the tennis that I am playing, it’s been a great tournament for me.”

So great that Dellacqua is assured of a career-best ranking inside the top 30 next week – 11 extraordinary months after slipping outside the top 200.

The game’s biggest rankings riser is very much on track to secure an Australian Open seeding for the first time.

And with minimal points to defend between now and Christmas, compared to the 21st-ranked Stosur, who made three finals at the end of 2013, Dellacqua is also favoured to crown her remarkable transformation with national No.1 status entering the Australian summer.

Yet the 29-year-old still craves more.

“I’m now at a career-high, but it doesn’t mean I stop working or stop improving,” Dellacqua said.

“I’m definitely not complacent with where I’m at because I’m reaching career-highs.

“In the last 12 months, there was only one way I was going to go – and it was that way. Now it’s at a crucial time where I need to continue to work hard, consolidate my space in the top 30.”

Beforehand, though, it’s family time for Dellacqua, whose stunning tennis rebirth has coincided since baby Blake was born 13 months ago.

“I’ve been away for five weeks. I’m looking forward to getting home, seeing Blake, being home, being a mum for the next week, just relaxing, switching off a little bit,” she said.

“It will be nice to freshen up before Asia.”

Dellacqua will play three big events on the Asian swing, starting in Tokyo on September 15.

“This is where I really just knuckle down,” the left-hander said.

Intent on squeezing every ounce out of her potential after almost losing her career to crippling foot and shoulder injuries that robbed her of most of 2009 and 2010, Dellacqua’s final frontier is an elusive last-eight showing at a major.

Three times denied in the fourth round, including twice this year, the West Australian said she’d love to be known as a grand slam quarterfinalist when her career’s all said and done.

“I thought that was a good opportunity for me today. I’m so disappointed,” Dellacqua said.

“I guess I’ve got to look at the positives, know now I’ve done it overseas, I’ve done it in Australia – but it’s nice to know you can do it outside of Australia as well.

“I’ve played some pretty good tennis consistently throughout the year. I have confidence one day I’ll get there.

“I’ve made a lot of finals in women’s doubles, but singles is still my priority. I’ll keep knocking on the door, keep getting another opportunity to go one further.”