Dellacqua’s “crazy” ride to the last 16

Casey Dellacqua admits her stunning transformation from doubles contender to Grand Slam singles force is "crazy", but says she's not done yet at the US Open in New York. 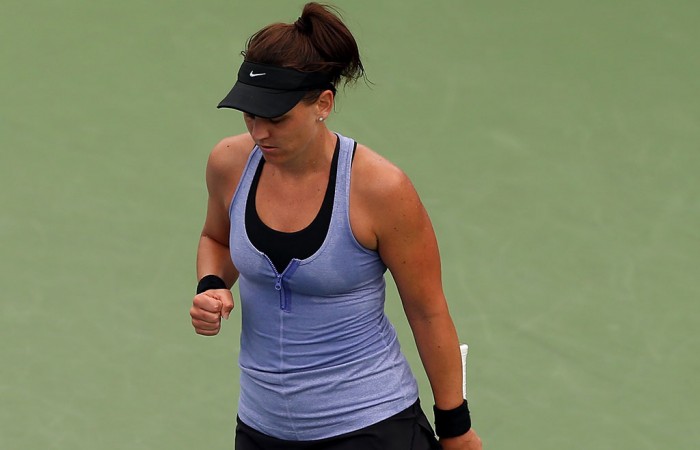 Casey Dellacqua admits her stunning transformation from doubles contender to Grand Slam singles force is “crazy”, but says she’s not done yet at the US Open in New York.

In an awesome display of unflinching counter-punching, Dellacqua defeated rising Czech Karolina Pliskova 6-3 3-6 6-4 in a high-quality third-round encounter on Saturday.

The big-hitting left-hander next plays Flavia Pennetta on Monday and victory over Italy’s 11th seed would thrust her into a grand slam quarterfinal for the first time.

“I’ve got to the fourth round a couple of times at the Aussie Open before and been close (including this year), but I’d really like to make my first quarterfinal.

“I really want to finish this slam off just as well as I started the year.”

After tumbling out of the world’s top 200 following a first-round defeat at Flushing Meadows last year, Dellacqua is incredibly now on the verge of cracking the top 25.

With former Open champion Sam Stosur under pressure to defend a mountain of rankings points from three late-season finals appearances last year, Dellacqua is also favoured to end 2014 as Australia’s new No.1.

“It’s actually pretty crazy to think,” said the 29-year-old mother of one.

“This trip I’ve had a lot of time to reflect on the past 12 months, probably because I haven’t had Blake around, so I’ve had a lot more time on my hands.

“But I’ve had a lot of time to reflect upon the last 12 months and it’s been quite a journey.

“This time last year I rocked up and was playing qualifying.”

Pliskova had trounced Dellacqua in straight sets in their only previous meeting, last October in Kuala Lumpar, but the West Australian once again proved she’s the most improved player in the game.

“The main goal for me now is just to be consistently be consistent. I don’t want to have results here and there,” Dellacqua said.

Chuffed to have lived up to expectations by taking out three lower-ranked foes, Dellacqua is now bracing for her biggest test yet.

“I’ll be pumped and ready to go to play Flavia on Monday. I’m ready for the challenge,” she said.

“She’s obviously a high-quality opponent. She made the semis here last year, is No.11 in the world. I guess I’ll just approach it the way I always do, and that is do all the things that I do well.

Pennetta powered into the last 16 with a 6-4 6-0 win over American qualifier Nicole Gibbs.

“It’s going to be a really tough challenge for me,” said Dellacqua, who made three major doubles finals in 2013 and won the 2008 mixed doubles title.

“She fights hard and both sides – forehand, backhand – she’s pretty solid and has a decent serve. So if she brings her A-game, I’m going to have to bring a really high level to beat her.”

The winner will play either two-time Australian Open champion Victoria Azarenka, the 16th seed, or Serbian qualifier Aleksandra Krunic on Wednesday for a semifinal spot.