Naiktha Bains has advanced to the second round of the Youth Olympic Games tennis event in Nanjing, China with a commanding straight-sets victory in her opening match. 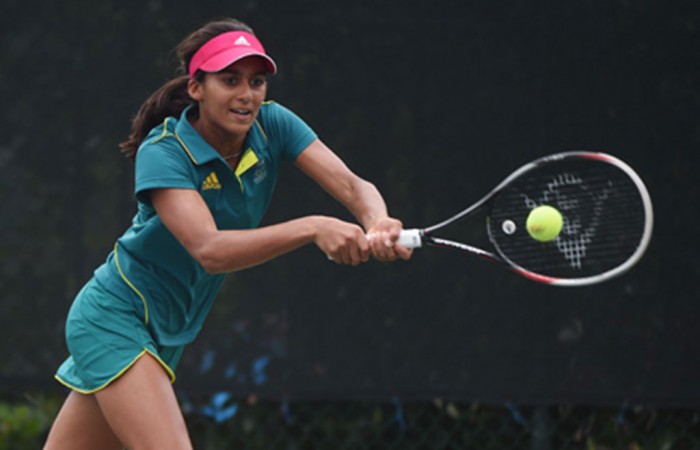 Naiktha Bains has advanced to the second round of the Youth Olympic Games tennis event in Nanjing, China with a commanding straight-sets victory in her opening match.

The Australian beat Ojasvinee Singh of India 6-4 6-1 to set up a second-round meeting with No.7 seed Anhelina Kalinina of Ukraine.

“It’s a big event and it’s a really special event, so to get a win first up is always amazing,” Bains said.

“(On) one of the match points I had, I was hitting a smash and I kind of went over on my ankle a bit but it was all good – I’ve done it before. I fell a bit, and I almost made the smash – I wanted to make that smash – but we went deuce, advantage, for a couple of points and then I managed to close out that game which I was pretty happy about.

“I’ve got pretty flexible ankles so I’ll be fine. I’ll do my usual warm down and recovery and stuff and I’ll be fine.”

Her compatriot Priscilla Hon was knocked out of the event on Tuesday, with the Queenslander going down 6-3 6-2 in the first round to No.4 seed Kristina Schmiedlova, a recent finalist in the Wimbledon junior singles event.

“I played her a few weeks ago, we had a pretty close one. But today I felt like I couldn’t do what I normally do. Maybe a few nerves there, but good on her,” Hon assessed.

“It’s a great deal that I can play for my country. I have been struggling a bit at the Grand Slams and the Olympics here of course. I’ve been getting a bit nervous, but hopefully I’ll get used to it soon.

“It gives me a lot more motivation to do well in the doubles. I love doubles. Having another person on the court makes me feel better, feel more relaxed. I think that’s the key to playing better.”

Hon and Bains, the fourth seeds in doubles, will play their second-round match on Tuesday in Nanjing.

In boys’ doubles, the Aussie pairing of Harry Bourchier and Marc Polmans fell in a dramatic match to No.2 seeds Orlando Luz and Marcelo Zormann of Brazil, losing 6-4 1-6 [10-7].

The four Aussies will also combine in mixed doubles, with Bourchier partnering Hon and Polmans teaming with Bains.

The mixed competition commences on Tuesday.