Australian teenager Nick Kyrgios has set up a second-round clash with Andy Murray at the ATP Toronto Masters after beating Colombia's Santiago Giraldo. 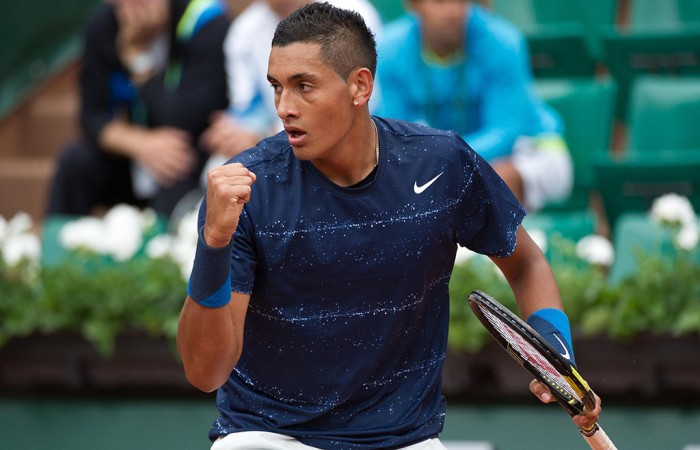 Australian teenager Nick Kyrgios has set up a second-round clash with Andy Murray at the Toronto Masters after beating Colombia’s Santiago Giraldo.

Meanwhile, compatriot Bernard Tomic was unable to join him in the second round of the ATP Masters 1000 event, falling in three sets to big-serving Croat Ivo Karlovic.

Kyrgios, 19, won 7-6(3) 7-5 on Tuesday in his first match since reaching the Wimbledon quarterfinals.

The Wednesday showdown will be a huge test for Murray, whose game has gone off the boil this season as he tries to regain his top form after back surgery 10 months ago.

The 10th-ranked Scot has not played since he saw his hopes of defending his Wimbledon title dashed in a quarter-final defeat to Bulgarian Grigor Dimitrov.

Kyrgios backed up his growing big-match reputation with his 94-minute win over Giraldo coming after the Aussie knocked Spaniard Rafael Nadal out in the fourth round of Wimbledon.

Kyrgios is making his Masters 1000 career debut this week after rising more than 100 ranking places in the past month and a half.

The world No.70 is the only teenager ranked inside the top 100.

He equalled his season record at the ATP level to 6-6 with the victory.

Kyrgios played fearless tennis as he trailed the more experienced Giraldo 5-2 in the opening set, with the wild card winning the opener in a tiebreak.

He claimed victory on his third match point in the second set after breaking the South American in the final game.

“First match back so I knew it was going to be tough,” said Kyrgios.

“I came out a bit flat. I thought I hung in well. I played the big points pretty well, I’m relatively happy.”

Kyrgios said that taking on Murray would be another huge challenge.

“He’s a great player, and I’m just going to go out there and just enjoy the experience to get to play another player like that,” he said.

“I definitely go into the match feeling like I’ve got a chance and I’m going to get some opportunities.

“But it’s going to be one of the toughest matches I have ever played, so I have just got to be ready for it.”

Later on Tuesday in Toronto, Tomic went down in an epic match against Karlovic, a rematch of their recent ATP Claro Open Colombia final in Bogota.

In a near-identical score to their match three weeks ago, the contest was again decided in a final-set tiebreak, only this time in was Karlovic coming out on top, 3-6 7-6(5) 7-6(6).

The match featured a combined 43 aces to just two double faults, with Karlovic’s tally of 30 aces proving the difference in the end.

Although Tomic was able to stave off several match points in the closing stages of the contest, he couldn’t deny the 35-year-old sealing victory in one hour and 53 minutes.