With tennis running through his family, young Queenslander Archie Graham has taken the next step with a dedicated approach to training and competing, and is now reaping the rewards at the highest competitive level. 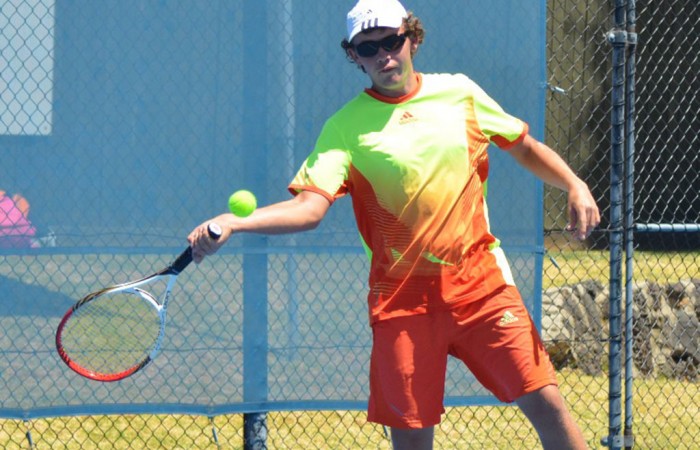 “My grandmother has a court, so whenever I get the chance I go there and have a hit. It’s been basically through the whole family, we all played tennis, that’s how I got started … When I was about seven years old, I started getting coaching for a while back then, then gave it a bit of break and then I came back [because] I started playing for school. Then I started playing seriously and ever since then I’ve been playing high level competitive tennis.

“When I was 16 I started getting coaching; now I’m at the Chermside Road courts [in Ipswich, Queensland] and Stan Cuthbert is my coach. He’s been helping me a lot, and thanks to him I got a sponsorship too with Polytec. I’m very thankful to have him as a coach and get the sponsorship.

“Rafael Nadal is my idol. I love his forehand and his hard work, his attitude to run down every ball, he’s just a fighter … I like hitting every ball very hard. The way the pros do it is extremely fast, watching them got me into the game. I’m working on trying to get that power and speed like the pros have.

“I train every day. I get up at 7am each day, have breakfast, then do some off-court work like power, endurance, speed and gym work. I hit the court in the afternoon from 2-5pm, and focus mainly on drills with Stan.

“Tennis is not actually that difficult [for me]. It’s good for me to get out every afternoon to have a hit. I do have a job but I don’t work as much now, so it hasn’t been hard to do my training. I’ve been training a lot lately and it’s really working for me … I work at another tennis centre outside on the clay courts, doing bit of maintenance stuff.

“I’ve done lots of travelling – I’ve been to Sydney and Melbourne. That’s where my recent success has been, I’ve won the Australian Tennis Championships for People With a Disability two years in a row [played at Albert Reserve, with finals at Melbourne Park] … It’s just unreal playing at Melbourne Park. Every time I come here it’s getting bigger, it’s huge. There will be opportunities next year to travel overseas, so I’ll be working hard and striving for that … next year, it’s the Global Games [for athletes with an intellectual disability] in Ecuador.”

“Give tennis a go and see where it takes you to be a better play. Just go for it, you have nothing to lose. You’ll meet some great people out there who are lovely.”