UPDATE: In a battle between Australia's top two men at the ATP Citi Open in Washington DC, Lleyton Hewitt has overcome Marinko Matosevic to advance to the third round. 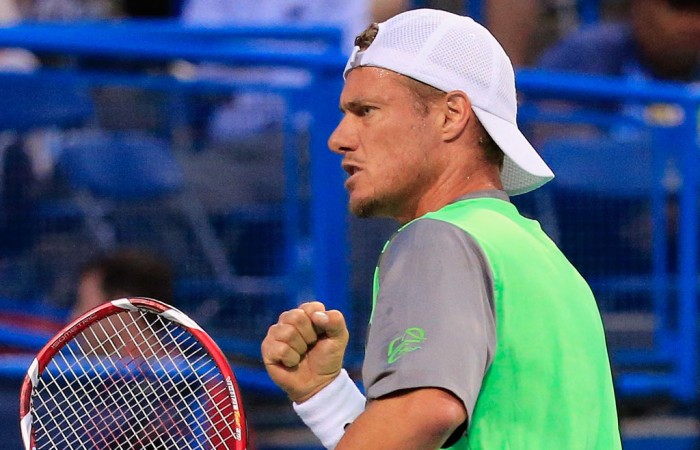 Lleyton Hewitt has overcome compatriot Marinko Matosevic to advance to the third round of the ATP/WTA Citi Open in Washington DC.

In a battle between Australia’s top two ranked men, Hewitt prevailed 6-4 6-3 in one hour and 22 minutes.

The 14th seed will next face the winner of the match between No.2 seed Milos Raonic and American Jack Sock.

“It’s a lot harder now playing fellow Australians now, because I’ve tried to help a lot of the other guys obviously as the elder statesman, especially in terms of Davis Cup, trying to get these guys up and get them a lot better,” Hewitt said.

“You work on some of their weaknesses and then it can cost you when you’re playing against them. Yeah, I find it a lot tougher nowadays to play the other Aussie guys, but in the end I was just happy to get the win.

“Marinko puts a lot of pressure on your serve … (I) played pretty well I think from the baseline, and returned pretty well.

“The toughest thing was adjusting to playing on hard court again, going from Newport and Wimbledon on grass, and before that was clay. So that was important to get it (a hardcourt match) under my belt.”

Hewitt is a past champion at the Washington DC event, claiming the title a decade ago in 2004.

Earlier on Tuesday in Washington, Bernard Tomic’s six-match winning streak came to an end at the hands of Denis Istomin.

Tomic went down 6-4 7-6(6) to the Uzbek, less than a fortnight after winning the Claro Open final in Bogota.

The 21-year-old followed the title triumph with a first-round win over Colombian Alejandro Gonzalez on Monday but couldn’t hold on against the 15th seeded Istomin.

It took Israel’s Dudi Sela two hours to get by lucky loser Groth on Tuesday, prevailing 7-6(3) 3-6 6-4 just two days after losing to John Isner in the Atlanta Open final.

Groth fired 16 aces but won just four of 16 break point chances, while Sela went three for six on his opportunities.

Wildcard Duckworth went down in two sets to American Steve Johnson, whose 6-3 7-6(4) victory earned him a second-round clash with compatriot and No.5 seed Isner.

In the women’s event, Olivia Rogowska went down to Serb Bojana Jovanovski.

The Victorian, a qualifier into the WTA International-level event, served for the match in the third set but eventually succumbed to last week’s Baku finalist 6-7(5) 7-5 7-5 in two hours, 35 minutes.