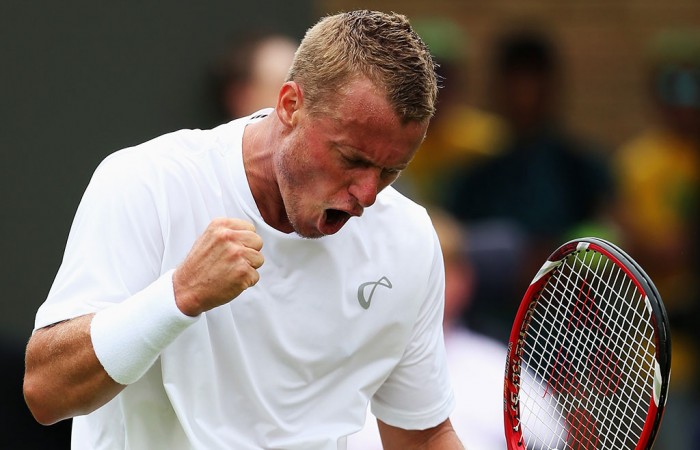 Losing a marathon second-set tiebreak was the only blemish for the veteran Australian in a 6-2 6-7(14) 6-1 6-4 victory on Tuesday.

The 2002 champion set up a second-round showdown against another Pole in 15th seed Jerzy Janowicz.

“Obviously (I’ll need to) weather the storm out there. We all saw the last couple of years here he’s played extremely well,” Hewitt said.

“He’s going to be up and down, though, so I got to go out there, play my game, keep a good level the whole time, especially be able to sort of keep that level for four or five sets, not let it drop off. When I get those opportunities, I’ve got to take them.

“But it’s going to be a tough match.”

World No.48 Hewitt became the seventh Australian through to the second round, making it the nation’s best start at Wimbledon in 15 years.

The 33-year-old made a superb start against 120th-ranked Przysiezny, racing to a 4-0 lead and wrapping up the first set in just 27 minutes.

Hewitt fought back from a 3-0 deficit in the second, only to lose an epic tiebreak battle.

The Australian failed to convert seven set points before double faulting to hand Przysiezny the set at his fourth opportunity.

Hewitt channelled his frustration in the third set, which was one-way traffic Hewitt’s way.

The Australian broke twice in the fourth set to secure victory in three hours and two minutes.

“This is what I still play for,” Hewitt said.

“You do all the hard work to come back and play in places like this. You don’t get sick of coming out here and playing at Wimbledon.”

Hewitt will need to string back-to-back wins together for the first time since claiming the ATP title in Brisbane in January if he is to reach the third round.