Casey Dellacqua is content in knowing she's finally beginning to fulfil the potential once threatened by injuries, and is learning from her experience. 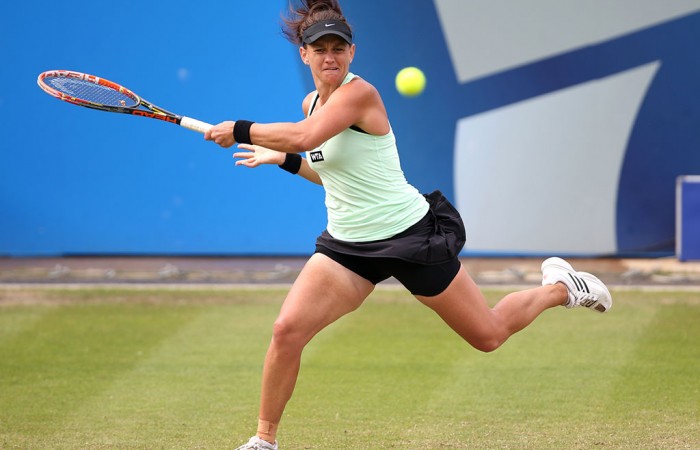 Casey Dellacqua isn’t sure just how far an impressive career resurrection can carry her at Wimbledon this week, or beyond.

It’s almost irrelevant to the 29-year-old Australian, who is content in knowing she’s finally beginning to fulfil the potential once threatened by injuries and a lack of direction.

Dellacqua is one of three Australian women opening their Wimbledon campaigns on Monday, along with 17th seed Sam Stosur and wildcard Jarmila Gajdosova.

The West Australian heads into a first-round meeting with Estonian qualifier Anett Kontaveit on the back of a stellar 2014 so far that has carried her to a career-high ranking of No.36.

Only last year, she was ranked outside the top 200; even before that, Dellacqua admits her work ethic wasn’t up to scratch.

She puts her remarkable transformation “98 per cent” down to coach Shannon Nettle, who has instilled a new emphasis on fitness and application, and it now seems a matter of how high Dellacqua can go.

“I don’t know – what do you think?,” Dellacqua said when asked about her new ranking potential.

“I’m not sure. I know it’s a cliche but I’m just thinking about the process. I’m thinking every day about, `what can I do to get better?’ (Even) if that’s going and doing things I don’t like doing, which maybe 10 years ago I never did.

“But that’s all about growing up. That’s about being 29 and learning from those experiences.”

With little rankings points to defend from last year, Dellacqua can continue her rapid rise with a winning run at the All England Club.

Her lead-up form – making the semifinals at Birmingham – suggests that is possible, although she’d need to overcome a likely second-round match-up with fourth seed Agnieszka Radwanska.

Also on a comeback trail of sorts is Gajdosova, who opens against Switzerland’s Stefanie Voegele.

The world No.177 was forced to take a break away from the game last year after being struck down by mononucleosis.

She earned a wildcard berth after winning the $50,000 Nottingham ITF event last week and is pleasantly surprised to be back in the main draw.

“It’s a long way back from where I was but this is a good step,” said Gajdosova, who recently became engaged to US Marine pilot Adam Wolfe.

The re-emergence of Dellacqua and Gajdosova has eased the burden on Australian’s top-ranked player Stosur, who was the nation’s only representative in women’s singles last year.

She matched her best effort by reaching the third round but Stosur faces a tricky first-round encounter on Monday against rising Belgian Yanina Wickmayer.

“It’s going to be a tough match but I know that if I play my tennis, I can impose my game on anyone,” said Stosur, who split with her coach of seven months Miles Maclagan last week.