Tomic falls in three to Gasquet

Despite putting up a strong fight, Bernard Tomic has fallen to top seed Richard Gasquet in the second round of the AEGON International in Eastbourne, England. 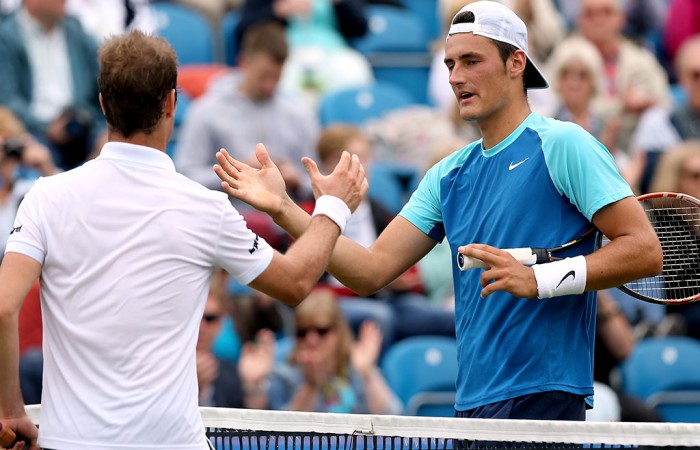 Bernard Tomic has gone down fighting in his last warm-up match before Wimbledon, a three-set loss to top seed Richard Gasquet at Eastbourne.

The Australian suffered a 6-4 3-6 6-3 second-round loss lasting almost two hours at the grasscourt tournament in England’s south on Wednesday.

While he was outclassed by the French world No.14, Tomic gave one of his most encouraging performances of the season in a timely confidence boost ahead of his favourite grand slam.

Tomic beat Gasquet at Wimbledon last year but had lost all four of their other clashes, including a first-round defeat at last month’s French Open.

Wednesday’s match was of much higher quality, with both men serving superbly and Tomic smashing 16 aces to eight.

One poor service game cost the Australian the first set, losing just two points on serve aside from being broken in the fifth game.

Tomic and Gasquet traded easy service games early in the second set before the Australian converted a fourth break point in an epic game to go 4-2 up.

He served out the second set with an ace out wide but was quickly on the back foot again in the deciding set as Gasquet broke to go 2-0 up.

Tomic let a 0-40 lead slip in the next game, failing to covert five break points, and Gasquet held on to set up a quarterfinal meeting with Donald Young or Martin Klizan.

Tomic’s ranking has fallen to No.82 having struggled to regain his form following two bouts of hip surgery in February.

However, encouraging performances at Queen’s and Eastbourne have raised hopes he can be a danger at Wimbledon, where he reached the last 16 last year and the quarterfinals in 2011.

Tomic rued his inability to capitalise on a handful of chances against Gasquet but was pleased with the hitout.

“I played a little bit defensive on the wrong points and that’s where I felt like I lost the match but, overall, it came down to a few points in that third set,” he said.

“It was pretty good tennis, he’s playing well and it’s difficult to play against him.

“It’s good confidence that I played a good match and this is what you need heading into next week.”