UPDATE: Marinko Matosevic's excellent week at Queen's Club has ended with a straight-sets defeat by top seed Stanislas Wawrinka in the quarterfinals. 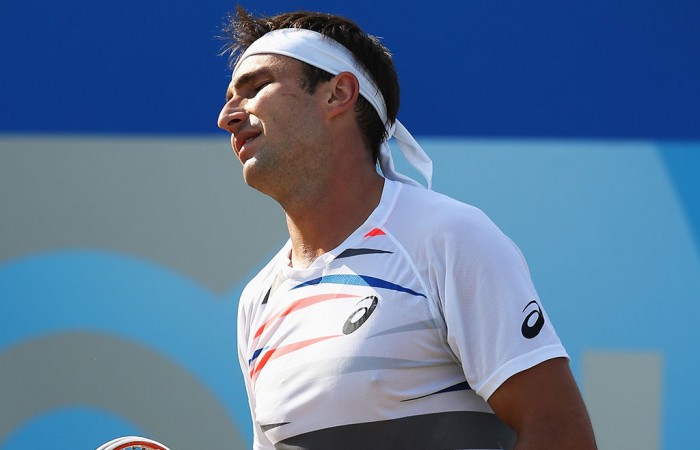 Marinko Matosevic’s excellent week at Queen’s Club has ended with a straight-sets defeat by top seed Stanislas Wawrinka in the quarterfinals.

The Australian couldn’t continue his giant-killing run at the grasscourt tournament as the Swiss world No.3 prevailed 7-5 6-3 on Friday.

Despite the defeat, 60th-ranked Matosevic will head to Wimbledon buoyed by an encouraging run to the last eight that featured wins over 2012 champion Marin Cilic and fifth seed Jo-Wilfried Tsonga.

“If you told me before the week I’d beat Marin and Jo, I would have taken it,” Matosevic said.

“Today the loss is disappointing but overall it’s been a good week.”

Ankle and hip injuries suffered in Thursday’s win over fifth seed Tsonga had placed Matosevic in some doubt for the semifinal.

However he looked to have recovered well and held his own against the top seed for most of the first set, fighting back from 0-40 down to hold serve at 4-4.

He finally let his service slip as he looked to force a tiebreak, double faulting on break point to hand the Wawrinka the first set.

The Swiss raced to a 3-0 lead in the second set and was always in control from there as he secured victory in one hour and ten minutes.

Matosevic felt he didn’t return as well as he had in previous matches but said there were plenty of positives to to take to the All England Club.

“The last two weeks have given me a lot of confidence and I think if I can get a good draw I can do some good things,” said Matosevic, who reached the final of a challenger event in Nottingham the previous week.

Wawrinka will face fourth seed Grigor Dimitrov in the last four after the Bulgarian progressed automatically when Ukrainian Alexandr Dolgopolov withdrew because of injury.