UPDATE: Marinko Matosevic defied an early injury scare to stroll past No.5 seed Jo-Wilfried Tsonga and reach the quarterfinals at Queen's Club. 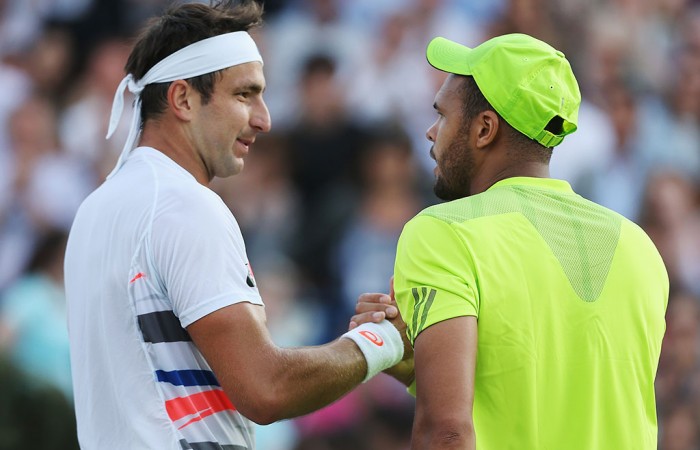 Marinko Matosevic overcame an injury scare to cause another boilover at Queen’s Club with a straight-sets upset of Jo-Wilfried Tsonga.

The Australian suffered a nasty fall on grass early in the match, hurting his ankle and hip, but battled on to thump the lacklustre French fifth seed 6-2 6-4 in the third round on Thursday.

It was another big career scalp for 28-year-old Matosevic after after he also beat 2012 champion and last year’s runner-up, Marin Cilic, in the first round.

His reward is a quarterfinal showdown with Swiss top seed Stan Wawrinka on Friday but Matosevic admits his injuries could put him in doubt for the encounter.

“We’ll see the physio and I’ll know more. The hip did get worse as the match went on,” said Matosevic.

“At first I was worried about the ankle and then after I sat down when he taped my ankle the hip started to feel bad.”

Despite Wimbledon looming, Matosevic said he wouldn’t err on the side of caution having worked so hard to reach the last eight.

“Queen’s is a big, huge tournament,” he said.

Matosevic made the perfect start, breaking in the first game, but he feared the worst when he rolled his ankle while up a break at 2-1.

The world No.60 grimaced with pain and immediately walked off the court but, after spending almost five minutes with the trainer, opted to continue.

He had his leg strapped two games later and his movement and footing looked to be affected.

However he wasn’t pushed very hard by a lethargic Tsonga, who joined British third seed Andy Murray in crashing out of the tournament.

Matosevic had said before the encounter the Frenchman taught him a lesson in their only previous match in Indian Wells four years ago.

“I was really impressed that day … it was a lesson. I still owe him 50 Euros for it,” Matosevic said.