Sam Groth’s fairytale run in the men’s doubles with Kazakh partner Andrey Golubev has ended in the semifinals at the hands of French pairing Julien Benneteau and Edouard Roger-Vasselin. 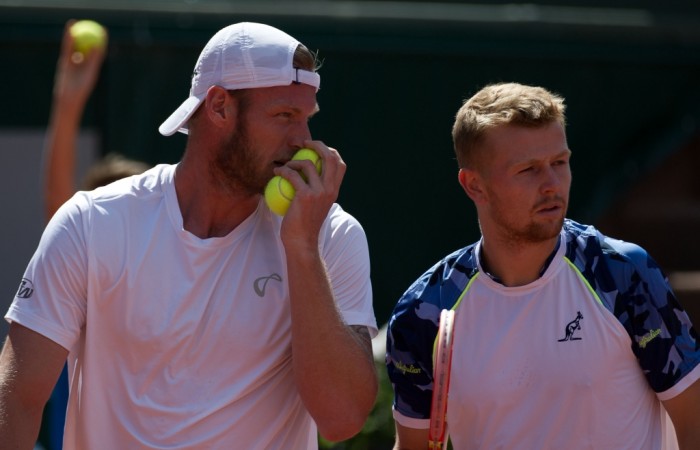 Sam Groth’s fairytale run in the men’s doubles with Kazakh partner Andrey Golubev has ended in the semifinals at the hands of French pairing Julien Benneteau and Edouard Roger-Vasselin.

The No.11 seeds came through a tight contest to triumph 3-6 6-3 6-4 on Court Suzanne Lenglen on Thursday, advancing to the final where they’ll meet 12th seeds Marcel Granollers and Marc Lopez of Spain.

Groth and Golubev found themselves up 3-1 and 40-0 in the final set, but narrowly missed a volley and a backhand and had to contend with some inspired, improvised play from the French pairing, who ultimately broke back in that fifth game and clawed back the deficit.

Despite the outcome, Groth recognised the magnitude of his achievement in Paris.

“It’s a big step forward for me … it’s May and I’m going to be career-high singles and doubles (in the rankings) come Monday. For me (reaching) the last round of quallies in singles, I’ve never made that in any Grand Slam and I guess to do it on clay for me is a good effort,” he said.

“(Then in doubles) semifinals of a Grand Slam and playing on Suzanne Lenglen, it’s a great feeling … it’s the highlight of my career so far.”

Although they were unseeded, perhaps the more surprising element to Groth and Golubev’s progression through the draw was the fact it was their first time playing together.

Groth was originally planning to play the event with fellow Aussie Matt Ebden, but their combined doubles ranking meant they just missed the cut-off for entry into the draw. It was exactly the same scenario for Golubev with his original partner, and so he and Groth joined forces at the eleventh hour.

And with Golubev preparing for his first round singles match against Andy Murray and the pair’s doubles match scheduled for the very next day, they only first stepped on court together when they warmed up about an hour prior to their match.

“Even on our off days I’d work with my coach and he’d work with his coach, and apart from warm-ups and matches we’d never step on the court (together) … we actually didn’t have a practice session together,” Groth revealed.

“Andrey hits very big and I’m serving big and covering the net, and I think we were both a little fearless and (had) nothing to lose for the tournament. Even today we had our chances. I think it was a pairing that worked really well; we got along really well, we were both really relaxed and just enjoying it out there.”

Groth and Golubev proved the giant-killers in the draw, upending fourth seeds and reigning ATP World Tour Finals champions David Marrero and Fernando Verdasco in the second round, before overcoming current Australian Open champions and ninth seeds Robert Lindstedt and Lukasz Kubot in the quarterfinals.

And they came so close to pulling off another upset in the semis. “It’s just the way it is. I guess we didn’t quite take our chances and they did,” Groth lamented.

For Groth, there’s barely any time to celebrate his latest milestone; tomorrow he’s hopping aboard a train for Great Britain and will begin his grasscourt preparations at the ATP Challenger in Nottingham. In doubles both there and at Wimbledon, he’ll team with Ebden.

“It might have been nice to play with Andrey (again) but I’ve committed to Matt,” he said.

“Matt and I have played well together before, we had match points on the Bryans (at Houston) earlier in the year so we’ll get over and do our thing.”