Todd Woodbridge and Mark Woodforde have been presented with the ITF’s highest accolade, the Philippe Chatrier Award, at the 2014 ITF World Champions Dinner in Paris. 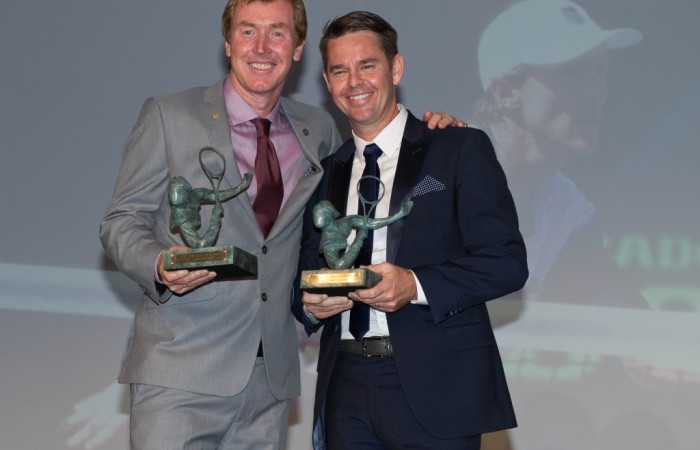 Australian doubles legends Todd Woodbridge and Mark Woodforde have been presented with the ITF’s highest accolade, the Philippe Chatrier Award, at the 2014 ITF World Champions Dinner on Tuesday 3 June in Paris at the Pavillon d’Armenonville.

Woodbridge and Woodforde received the award both for their achievements on court, and their dedication in their varied roles as coaches, commentators, administrators and mentors.

Known as the ‘Woodies’, the pair enjoyed outstanding results together between 1990 and 2000, winning 11 Grand Slam men’s doubles titles and a total of 61 tournaments.

Their greatest success came at Wimbledon, where they are the only men’s partnership in the Open era to win five straight titles (1993-1997), and hold the Open era record of six championships.

The pair completed their set of Grand Slam titles when they won the elusive Roland Garros crown in 2000, shortly before adding their sixth Wimbledon title.

The Woodies won the Olympic gold medal at Atlanta 1996, and four years later took silver in Sydney. In Davis Cup, they compiled a 14-2 record together, scoring the vital doubles point that helped Australia defeat France for the title in 1999.

“They continue their commitments to tennis in a variety of capacities and are being honoured for their outstanding – and ongoing – contributions to the game.”

The Bryans won the men’s doubles trophy for the 10th time.