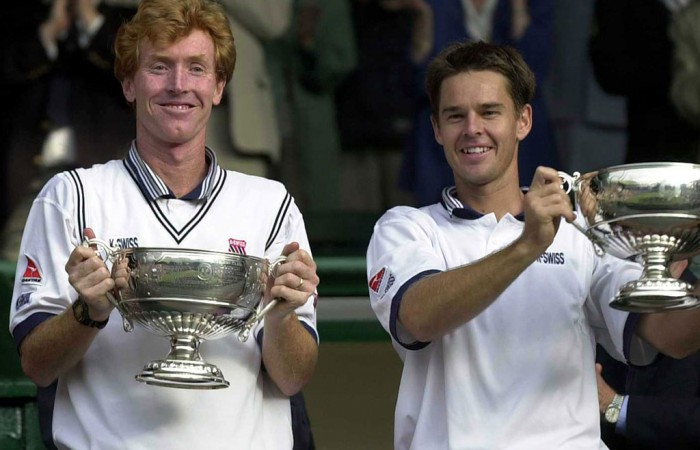 The award will be presented at the 2014 ITF World Champions Dinner on 3 June during the French Open, starting this week in Paris.

The Philippe Chatrier Award, named after the former ITF President, was introduced in 1996 and is awarded each year for outstanding contributions to tennis.

Woodbridge and Woodforde, known as the Woodies, enjoyed outstanding results from 1990 to 2000, winning 11 Grand Slam men’s doubles titles and a total of 61 tournaments. Their greatest success came at Wimbledon, where they are the only men’s partnership in the Open era to win five straight titles (1993-97), and hold the Open era record of six championships.

The Woodies won the Olympic gold medal in Atlanta in 1996 and, four years later, took silver in Sydney. In Davis Cup, they compiled a 14-2 record, scoring the vital doubles point that helped Australia defeat France for the title in 1999.

The pair completed their set of Grand Slam titles when they won the elusive Roland Garros crown in 2000, shortly before adding their sixth Wimbledon title. When Woodforde retired after the 2000 Olympics, they had a 508-137 career record.

The Woodies’ dedication on court has been matched by their varied roles as coaches, commentators, administrators and mentors. They will be honoured both for their achievements and their commitment to tennis.

Woodforde said it was such an honour to receive the award as Philippe Chatrier was a true pioneer of world tennis.

“I’m moved so deeply that Todd and I will be joining such grand champions and following in the footsteps of the other Aussies to receive this accolade,” he said.

“To be the first doubles team honoured not only highlights the success of the Woodies on court but also recognises our continual involvement with this cherished sport via our international media duties as well as our coaching and player development roles back home in Australia.”

Woodbridge said it was such an honour and unexpected.

“I still get enormous joy out of tennis and being able to give back from my experiences is a pleasure in both coaching and broadcasting,” he said.