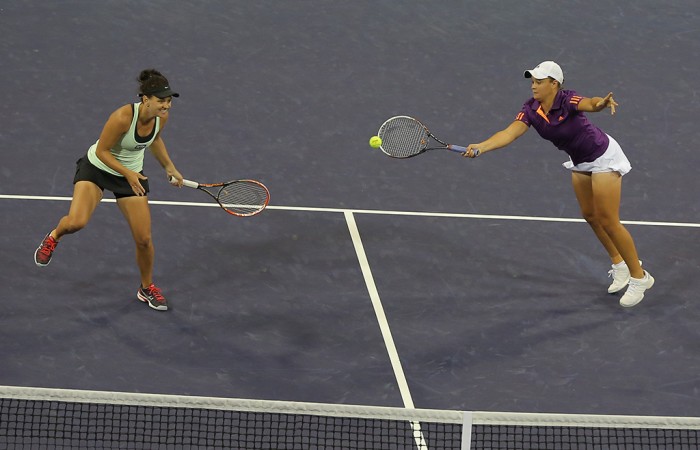 Earlier in the day, compatriot Sam Stosur combined with Svetlana Kuznetsova to oust No.3 seeds Sara Errani and Roberta Vinci in a nail-biter.

Barty and Dellacqua, the seventh seeds at Indian Wells, recovered from a deficit in the opening set and clawed their way back from 4-2 down in the second to lead 5-4.

But the coach-protege pairing of Hingis and Lisicki came roaring back, storming through the second set tiebreak without the loss of a point and sending the match to a decisive match tiebreak.

This was where Barty and Dellacqua’s greater experience as a duo shone through.

Stosur and Kuznetsova, a wildcard pairing, won in near-identical circumstances.

Next up for the pair is a second round match against Anabel Medina Garrigues and Yaroslava Shvedova.

“I do like playing doubles,” said Stosur, who has committed to teaming with the Russian for the rest of 2014.

“Svetlana and I, we’re planning to play whenever we do want to play – provided we’re healthy and can do it – at a bunch of the bigger tournaments and the Grand Slams, (and) see how we feel week-to-week as to whether we want to play.”