Australia will meet Germany in April for a place in the Fed Cup final after the Germans coasted to a semifinal victory over Slovakia on Sunday. 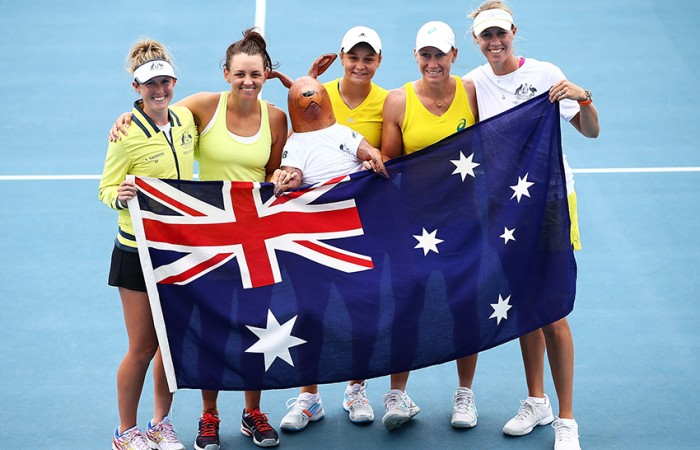 Germany has coasted into the Fed Cup semifinals on Sunday, where it will next meet Australia.

In Hobart, Australia ensured its place in the next round for the first time in 21 years with a crushing Samantha Stosur-inspired 4-0 defeat of Russia.

The 2011 US Open champion added to her Saturday singles win when seeing off Fed Cup newcomer Victoria Kan 6-2 6-3 in Sunday’s opening rubber to secure an unassailable 3-0 lead.

Ashleigh Barty and Casey Dellacqua sealed a clean sweep over the Russians with an emphatic 6-1 6-3 doubles win over Irina Khromacheva and Valeria Solovyeva.

“We’re still in it, so we have a chance to win it,” Stosur said of Australia’s prospects of claiming the title for the first time since 1974.

First though they will have to overcome Germany, waiting for them in the semis.

The Germans, who were last crowned champions in 1992, qualified after Angelique Kerber defeated Slovakia’s Australian Open runner-up Dominika Cibulkova 6-3 7-6(5) in the first of the reverse singles in Bratislava.

Kerber supplied her team with its second point after defeating Daniela Hantuchova 7-6(9) 6-1 in the second of Saturday’s two singles, after Andrea Petkovic had saved a match point en route to a 1-6 7-6(7) 6-2 win over Cibulkova.

“I had so much emotion from the team,” Kerber said.

“It was tough, so I was just trying to play point-by-point. I think I played well, I moved well, I mixed it up well, sometimes aggressive, sometimes defensive, and I’m so happy that we’re now through.”

This is the first time Germany have graced the last four since 1995.

Australia and Germany will contest their semifinal on 19-20 April; a venue has yet to be determined, although Australia holds the choice of ground.