Thanasi Kokkinakis, Nick Kyrgios and Olivia Rogowska provided a triple-treat for Aussie fans when they won their first round matches on Day 2 of the Australian Open. 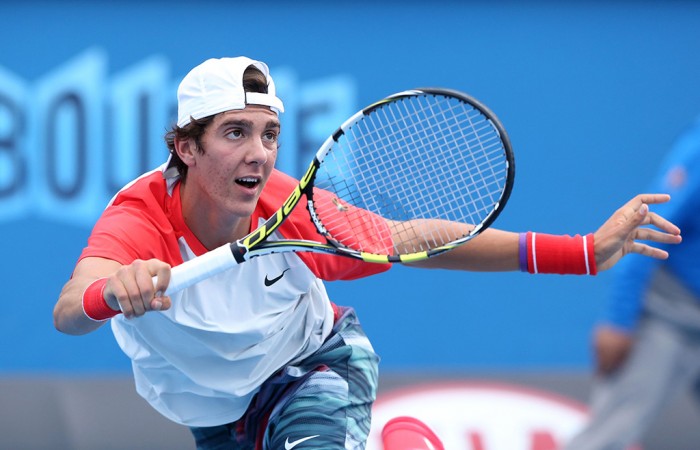 Three Australians tasted victory on Day 2 of the 2014 Australian Open.

Played in searing heat, it was the youngsters who provided the highlight for Australia in trying conditions.

Thanasi Kokkinakis, Nick Kyrgios and Olivia Rogowska provided a triple-treat for Aussie fans when they all defeated players ranked higher than themsleves.

Nick Kyrgios marched into the second round via a stellar display against world No.81 Benjamin Becker.

Rogowska was victorious when she took just over an hour to dispose of Columbian Mariana Duque-Marino.

Lleyton Hewitt was not quite as fortunate. Hewitt went down in five sets to Italian 24th seed Andreas Seppi in a thrilling match.

Earlier, James Duckworth also did it tough. If the high temperatures and swirling winds weren’t already enough, Duckworth was also faced the unenviable task of coming up against four-time Australian Open champion Roger Federer on Rod Laver Arena in his first round encounter. Duckworth was far from disgraced against a player who has made light work of some very good players in the past.

Another early casualty for Australia was Storm Sanders, who went down Italian Camila Giorgi 4-6 6-1 6-4 in a tough three-set battle. The 19-year-old wildcard, took the first set 6-4 in 37 minutes before the Italian hit back taking the second.

Sanders had the advantage of a break in the final set before world No.99 Giorgi reeled off four straight games to take the match in just under two hours.

Show Court 2 played host to one of the most physically demanding matches of the tournament so far when Marinko Matosevic staged an epic five-set encounter with Japanese No.16 seed Kei Nishikori which lasted almost four hours. Matosevic and Nishikori traded sets with the Australian winning the first and third to push the match to a decider.

Nishikori defied the oppressive conditions to produce a fifth-set of the highest quality and take the match 3-6 7-5 2-6 6-4 6-2 in a battle that saw players leave every last ounce of energy on the court.

Unfortunately Bernard Tomic’s 2014 Australian Open campaign ended just 41 minutes after it started. Tomic was forced to withdraw due to injury during his match against world No.1 Rafael Nadal after the Spaniard took the first set 6-4.