Australian Samantha Stosur, the tournament’s top seed, will today play for a spot in the 2014 Hobart International semifinals. 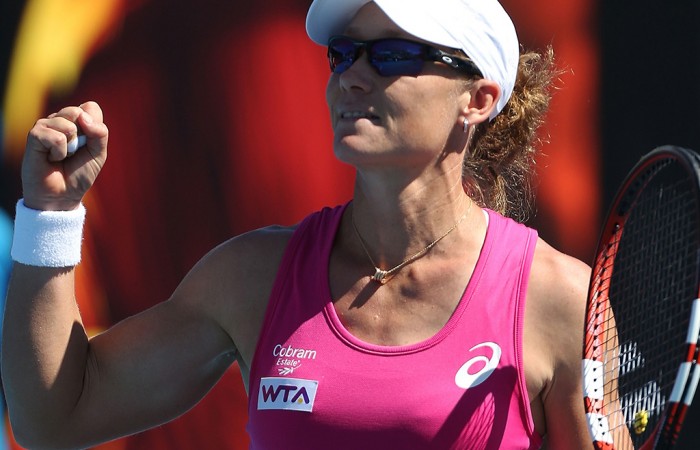 Australian Samantha Stosur, the tournament’s top seed, will today play for a spot in the 2014 Hobart International semifinals.

The world no. 17, whose last quarterfinal appearance on Australian soil was in 2007, meets Serbian eighth seed Bojana Jovanovski in the quarter-finals. It is the second match on the Domain Tennis Centre’s centre court today.

Stosur has scrapped through her last two matches, winning both in final set tiebreakers and saving two match points in her second round match yesterday.

After yesterday’s win Stosur proclaimed she finished with the best tennis she had played all week. It is an ominous sign for the 22 year-old Jovanovski, who lost to Stosur in their only previous meeting. That was on grass, Stosur’s least preferred surface, in 2011.

Zakopalova, competing in Hobart for the eighth time, was impressive in a straight sets rout of China’s Shuai Zhang yesterday. She declared it her best match in five months.

She will be hoping to continue that form against the 23-year-old Riske, who has upset fourth seed Anastasia Pavlyuchenkova and Australian Casey Dellacqua to progress this far.

It will be first meeting between the pair.

The third singles quarter-final pits Romanian Monica Niculescu against Spanish qualifier Estrella Cabeza Candela. Both recorded victories against former Hobart International champions, Mona Barthel and Elena Vesnina, in round two to advance.  The 26 year-olds will be playing each other for the first time.

The final match of the day session is a doubles quarter-final between third seeds Irina Buryachok and Oksana Kalashnikova and Spanish combination Lara Arruabarrena and Silvia Soler-Espinosa.

The night session opens with the final doubles quarter-final, which sees Niculescu and Zakopalova return to the court to play the Japanese pair of Shuko Aoyama and Miki Miyamura.

It is followed by the final singles quarter-final, where Spanish qualifier Garbine Muguruza faces second seed Kirsten Flipkens of Belgium.