It’s not quite Australia Day yet, but you could be forgiven for thinking it was if you took a look at today’s Hobart International schedule. 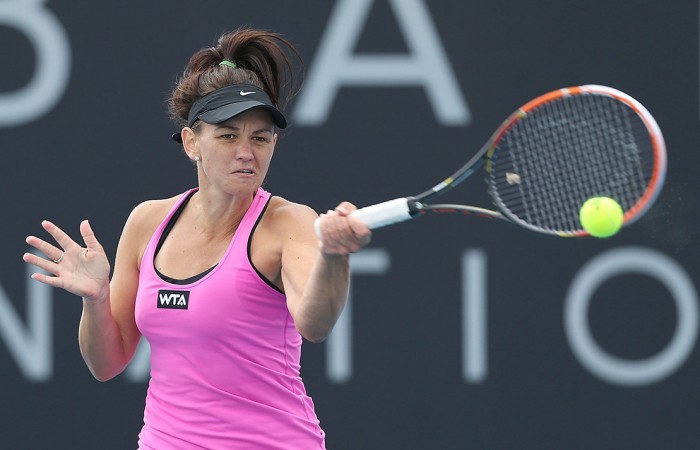 It’s not quite Australia Day yet, but you could be forgiven for thinking it was if you took a look at today’s Hobart International schedule.

Australians are prominent throughout today’s order of play, which features the conclusion of round one singles and doubles match and the start of second round singles.

Australian juniors Kimberly Birrell, 15, and Olivia Tjandramulia, 16, kick off proceedings at the Domain Tennis Centre’s centre court in a women’s doubles match from 11am. The wildcard pairing face the tournament’s second seeds Lisa Raymond of America and Shuai Zhang of China in the first round.

Defending champion Elena Vesnina is next on court, resuming her first round singles match against Puerto Rican Monica Puig. Rain forced the match to be abandoned last night at 1-all in the first set.

The ever-popular Australian Casey Dellacqua follows in a women’s singles second round match. Dellacqua, a wildcard entry, faces American Alison Riske, who upset fourth seed Anastasia Pavlyuchenkova in the first round yesterday. The Australian has never played the world no. 55.

Australia’s Olivia Rogowska headlines centre court’s night session. The 22 year-old wildcard entry posted her first ever main draw win at the Hobart International yesterday and now faces eighth seed Bojana Jovanovski from Serbia in the second round. The Australian beat the world no. 34 in their only previous meeting, prevailing in a third set tiebreaker on hard court in America in 2012.

Don’t forget you can follow our live scores and streaming to keep track of all the action. The Hobart International Twitter account will also keep you updated with scores and things happening at the Domain Tennis Centre.

Tickets for today’s session can be purchased at ticketek.com.au.