A brilliant finish to last year didn't translate into a good 2014 start for rising tennis star Simona Halep, the Romanian the first major casualty on day one of Apia International Sydney on Sunday. 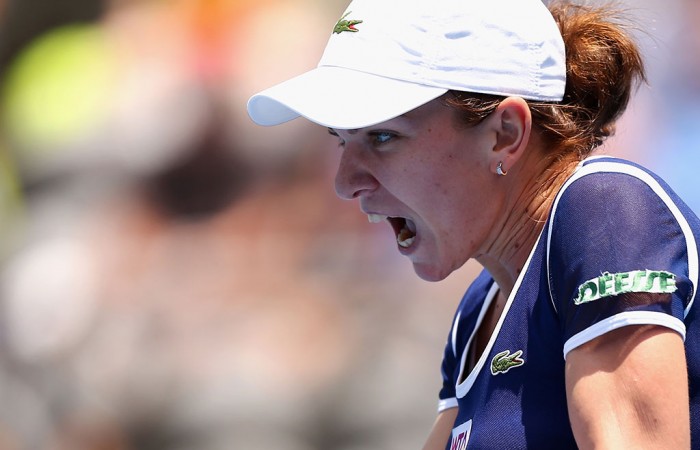 A brilliant finish to last year didn’t translate into a good 2014 start for rising tennis star Simona Halep, the Romanian the first major casualty on day one of Apia International Sydney on Sunday.

Halep, the seventh seed, went down to American Madison Keys 6-1 6-4.

It was a surprisingly timid first-round loss for Halep, who had an outstanding back half to 2013 when she won six tournaments and rocketed from No.64 to her current No.11 in the world.

She was named most improved player on the WTA tour last year with some pundits predicting a Grand Slam could be in the offering for her in 2014.

Errani said it was tough playing someone she was so close to.

“The hard thing is not the kind of play – we know each other very well,” she said.

“But to play against your best friend is very difficult.

“I don’t know how to explain it but it is not easy to go there and play your best but I think we both played a good match today.”

In the only other first round match of the day wildcard Alja Tomljanovic from Croatia upset world No.33 Daniela Hantuchova 6-4 7-5.

Australian Matthew Ebden will be looking to take advantage of his wildcard when he takes on sixth seeded Julien Benneteau from France in an early evening match at Sydney Olympic Park Tennis Centre.

Benneteau was the 2012 runner-up in Sydney and has reached nine ATP finals without a breakthrough career singles title.

Meanwhile eighth seeded American Sloane Stephens has withdrawn from the tournament with a left wrist injury.

“I was having some pain in my wrist and the doctor recommended I not play this week,” she said in a statement.

“This is a difficult decision, but the best decision for me and my team to make.”

Stephens, best known for her defeat of Serena Williams at the Australian Open quarterfinals in 2013, had withdrawn from her last Hopman Cup match during the week citing the same injury.