Casey Dellacqua and Arina Rodionova will face off for a spot in the Australian Open after winning their semifinals matches today. 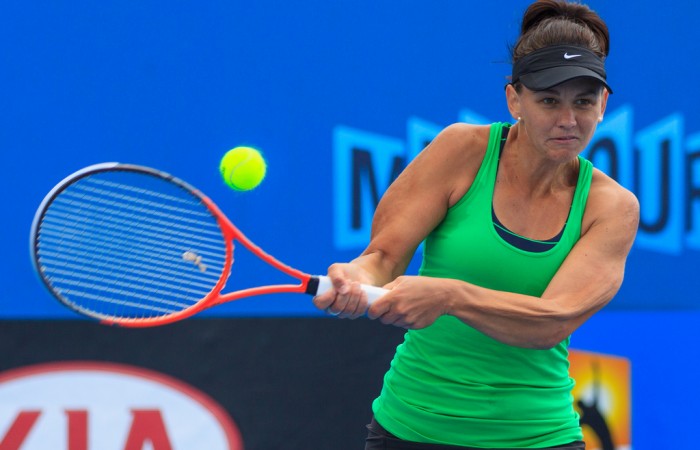 Neither woman had dropped a set until their quarterfinal matches earlier this week where Patterson had upset fourth seed Jarmila Gajdosova.

Dellacqua was especially keen to take out the semi in straight sets on Saturday morning.

“I knew that I wanted to finish that second set off so I could get a massage and watch the cricket,” Dellacqua said after the match with a relieved chuckle.

After a somewhat shaky start, Patterson came back fighting hard with a point to prove toward the end of the second set. She made the most of openings on the court, not hesitating to put away the odd deep, winner volley at the net. She gave Dellacqua’s backhand quite the workout, forcing the lefty out to the sidelines with low, angled drives.

“I know a lot of these ITF girls playing here in Australia have nothing to lose against me, in a way, and they always do come out swinging and so I’ve got to be prepared that they’re going to be playing some good tennis,” Dellacqua said reflecting on Patterson’s aggressive play.

To Patterson’s disbelief, Dellacqua immediately broke back and followed through to place significant pressure on the eighth seed’s service game, which she struggled to hold, allowing the top seed to surge to a more than comfortable 5-3 lead.

With still one break to win back, Patterson continued to attack her opponent’s backhand. But the delivery of a powerful final service game came a little too late in the match and Delacqua clinched the match.

“Winning the play-off is the main focus this week, to secure that wildcard to set the summer up knowing I have that under my belt and so I can prepare.

“I’ve been training through this week as well as playing so I’m getting a little bit tired towards the end of the week but I know that I’ve got one more match tomorrow. I’ve been doing all of my extra training in the gym and running because it’s the only time of the year when you can get a good training block in.”

Dellacqua revealed that, at the moment, she is not particularly focused on winning any one match but is rather looking ahead at gaining momentum for 2014 and getting off to a fresh, promising new start that could see her ranking shoot back up into the top 100. The Sydney-based player reached a career-high singles ranking of 39 in 2008 before a string of injuries held her back from reaching her full potential.

“It’s a matter of just putting yourself out there and putting yourself on the line. There’s nothing to be scared of, I know I’m doing the work. These [the December Showdown tournaments] are good opportunities and Tennis Australia put these events on so I think we should be playing them. I know there’d be a million girls dying to play for a spot in the Australian Open.

“All the other girls around the world aren’t playing matches at this time of the year, so in that respect it’s probably good for me as well leading in to the summer… what better a situation than to play under pressure and to play competitively because when you haven’t played for a while it can take a while to come back.

“Ash and I have had a really good year on the doubles circuit but in the back of my mind I’ve always wanted to play singles and it’s been my main focus. Sometimes when you’re doing well in one event it can hinder the other, in a way. But certainly having that doubles success has helped my singles because it’s given me the confidence and still the belief that I can compete with all the best in the world.”

In the other women’s semifinal, Rodionova defeated Viktorija Rajicic in straight sets 6-1 6-4. Sunday’s final will be the first on-court meeting between Dellacqua and Rodionova. In the men’s final, fourth seed Jordan Thompson will face last year’s play-off winner and third seed Ben Mitchell.

The women’s final will begin at 11 am on Court 6 at Melbourne Park, followed by the men’s final. Entry is free or you can watch the live stream on our YouTube channel.