UPDATE 5pm: Casey Dellacqua would love to win an Australian Open wildcard on merit, and took a step closer to that with victory over Monique Adamczak. 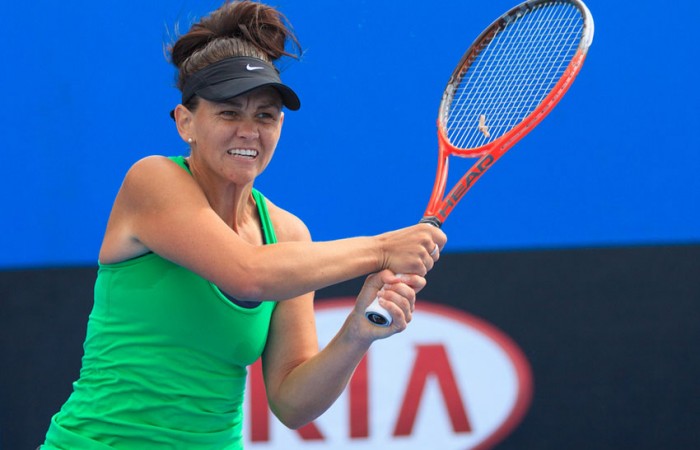 Casey Dellacqua recognises that a victory in the Australian Open Play-off would do wonders for her belief.

“(It’s a) really good opportunity for players to put themselves out there and to earn their spot in that main draw. I know when I’ve gotten in (to the Australian Open) off my own ranking or I’ve earned my wildcard you just feel like you belong that little bit more,” she said.

“I’d love to win it and know I’ve won my way in as opposed to just always just being given a wildcard.”

On Thursday, the Western Australian took another step towards doing just that with a topsy-turvy victory over Monique Adamczak in the Play-off quarterfinals.

Prior to the tournament, Dellacqua acknowledged the strength of the field – which included Jelena Dokic, Anastasia Rodionova and Jarmila Gajdosova – and even identified players such as Adamczak who would make the path to the wildcard even tougher.

Adamczak certainly did make it tough – for the first set at least.

Playing bold, attacking tennis, the 30-year-old Sydneysider couldn’t miss, blasting powerful forehands past the shell-shocked Dellacqua and frequently taking balls out of the air for swinging volley winners. She clinched the opening set in the blink of an eye without the loss of a game.

But the equally-experienced Dellacqua found her game, and when Adamczak’s level dipped slightly, the momentum had completely shifted. Now it was the top seed finding the corners of the court, while Adamczak’s game unravelled. Two wild errors handed Dellacqua a 4-0 lead, and three games later, she’d levelled the match at a set apiece.

Despite the third set being more competitive, Dellacqua always held the edge.

“I just needed to find the court a little bit, hone in on my strokes and then I was able to swing out a little bit more once I found my range,” she said, who admitted to feeling slightly drained after a week of combining training with match-play.

“I don’t really worry too much. At the end of the day, if I walk off and lose 6-0 6-0, what’s the worst that can happen? I compete as hard as I can, and today, it wasn’t great the first set, but I was able to turn it around. I think the main thing is trying to stay as relaxed as you can.”

The toughest test came in the seventh game of the third set, but from deuce, Adamczak coughed up two errors to drop serve.

The win takes Dellacqua’s winning streak to 12; she won 10 straight matches in capturing back-to-back Pro Tour titles in October and November, and having now beaten Maddison Inglis and Adamczak this week at Melbourne Park, finds herself in the Play-off semifinals. It continues a stellar run of form for the left-hander, who since Roland Garros has won 22 of her past 26 singles matches.

Looming as her next opponent will be No.8 seed Tammi Patterson, who dispatched Gajdosova in three sets. Yet rather than watch that match, Dellacqua was intent simply to concentrate on her recovery and continue to focus on the things that had got her to this point.

“I feel good. I haven’t really stopped playing (all year) to be honest … I played Bendigo and had 10 singles matches in those two weeks which was perfect and I’ve continued hitting and training and my body and mind feels good, so I’m looking forward to hopefully playing through to the finals this week,” she said.

Yet regardless of this week’s result, the last several months on tour have positioned the Aussie No.2 for strong run to begin 2014.

While her doubles results have been exceptional, singles remains Dellacqua’s priority heading into the new year, as well as the goal of getting her ranking back inside the top 100 where she was once a fixture.

“I want to be playing hopefully main draw at the French Open and the (other) Slams … I don’t have a heap of points coming off early next year so I’d hope to try and make lots of gains early in the year and set my year up,” she revealed.

“Other than that, I just want to stay healthy, and hopefully play a lot more doubles with Ash, and continue that run that we have going … (and) to continue to enjoy my tennis.

“I’ve had really good results when I’ve been in that good frame of mind and healthy and playing well, so hopefully that continues.”

In the bottom half of the draw, seventh seed Viktorija Rajicic overcame Jessica Moore in a tough three-set battle in the last match of Thursday’s schedule at Melbourne Park.

The Victorian 19-year-old recorded a 6-2 3-6 6-2 victory to advance to the semifinals, where she will meet No.3 seed Arina Rodionova.

Rodionova was gifted free passage through to the semifinals after opponent Storm Sanders withdrew prior to their match with an abdominal injury.