Determined to erase the painful memories of his Australian Open 2013 first round loss, Ben Mitchell made the best possible start to that quest on Tuesday. 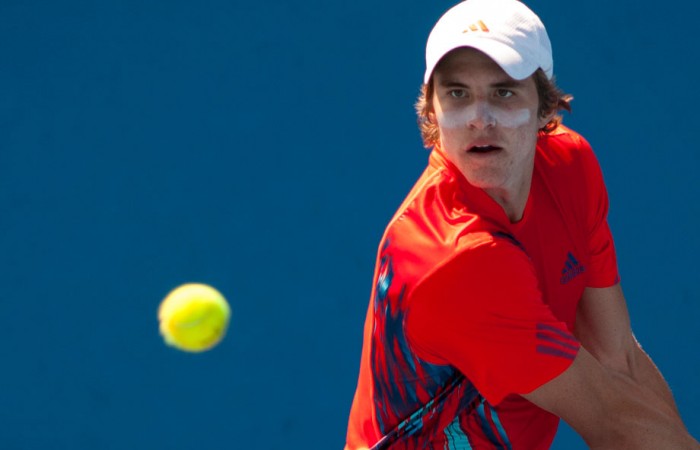 Determined to erase the painful memories of last year’s first round loss at the Australian Open, Ben Mitchell made the best possible start to his quest to re-write the script at Melbourne Park.

The Queenslander dominated his opening round match in the Australian Open Play-off on Tuesday against emerging junior Harry Bouchier, winning 6-4 6-1 6-0 to cruise into the quarterfinals. He will next face Andrew Whittington, who won in similarly comfortable circumstances over Max Purcell.

Mitchell will fancy his chances against the sixth-seeded Whittington. It’s taken a great deal of mental resolve to find the happy headspace he is currently enjoying, and it’s reflecting in his performances on court. Since April, he’s gone 35-17 in tournaments on both the ATP Challenger and ITF Futures circuits, winning two Futures titles and improving his ranking considerably.

These performances were far removed from the player who was shattered following his five-set defeat to compatriot James Duckworth at Australian Open 2013. Having won the Play-off event in late 2012, Mitchell entered the year’s first Grand Slam event in great form and high on confidence, but found that loss extremely hard to overcome.

“It was an awesome experience (winning the Play-off but) I try and forget the match that I played (against Duckworth) because it was heartbreaking, and it took a while to get over,” he revealed.

Indeed, in the near three months following that loss, Mitchell went down in six of his next eight matches. But something clicked when the then 20-year-old headed to the US for a series of Futures events; finishing that swing with a semifinal and quarterfinal appearance injected belief back into his game, and in his very next tournament in Thailand, he went all the way to the title. He followed that up with another title just two events later in Korea.

Having dipped as low as world No.406 in March, that little purple patch – in which he won 16 of 19 matches – helped him slash his ranking by more than 100 places.

Now up to 262nd in the world, Mitchell is feeling good about his game, and buoyant about his 2014 prospects.

“I like setting short time goals. Obviously I want to be at the Grand Slam qualifying. I’ve set myself up and got myself a pretty good ranking for that for that at the moment so I’ll be looking forward to the French (Open) and Wimbledon and hopefully I can be in the main draw of the Australian Open as well,” he said.

“The last six months of the year has been really good, big turnaround and I’m happy and playing better.”

Another factor in that turnaround has been Mitchell’s time training in Brisbane. The Queenslander admitted that the constant travel demands of professional tennis were tough, and that even when in Australia, he was training in Melbourne away from friends and family.

“I feel like I’m playing better tennis than what I was at this time last year … I think (because) I’m back home now. At (this time last) year I was in Melbourne and I think I missed my family a little bit,” he said.

So with game flourishing, mentality positive and motivation high, Mitchell sees this year’s Australian Open Play-off as a platform from which to build further on the gains he made in an impressive 2013 season.

“You want as many opportunities as you can as a tennis player and this (the Play-off) provides such a big opportunity. And it really gives you a lot of confidence; I was very confident in my game after winning the play-off last year,” he said.

“So I want to have another chance to get into the (Australian Open) main draw and try and win a few rounds.”