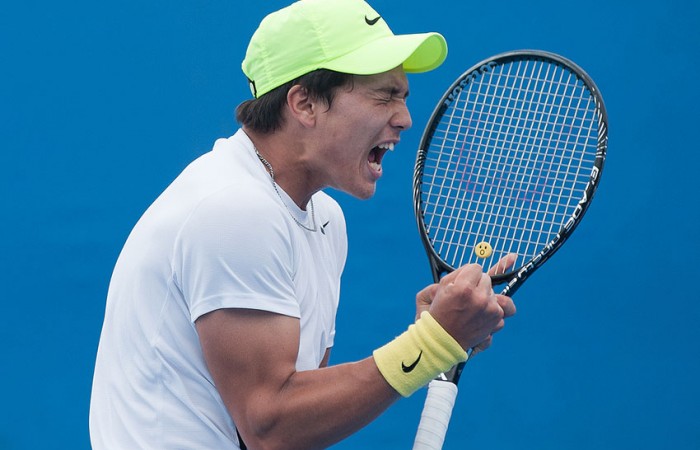 After disappointing weather conditions led to the cancellation of Day 1 of the Australian Open Play-off, the second day more than made up for it, giving rise to some intense five-set matches including 16-year-old Akira Santillan’s remarkable upset of second seed Matt Reid.

A semifinal finish in the boys’ Australian 18/u Championships last week had granted Santillan a place in the Play-off, presenting the opportunity for the Brisbane-based player to experience his first five setter.

He stormed ahead to an incredible lead of two-sets-to-love against his older and more experienced opponent, although Reid remained level headed, controlling his attitude to turn his game around and level the score at two sets apiece.

For Reid, it was a serious case of déjà vu; young Jacob Grills had also given him an early scare in his first match of the AO play-off this time last year.

The nerves raged on both sides of the court as a string of unforced errors came off each of the players’ racquets. But Santillan was back in the zone, refocusing to dominate rallies and snatching hold of the fifth and final set.

“I was pretty nervous going in,” admitted Santillan.

“It’s my first five setter so I’m pretty excited about that and I won it which is a pretty good achievement in itself. I didn’t go out here to win and I obviously didn’t expect too much. I probably need to work on my mental game because I will probably be playing more five setters in the future.

Saville scrapes through in five

At the same time on nearby Court 5, 19-year-old Luke Saville was experiencing a similarly gruelling five-set match against good friend Brad Mousley.

Mousley did well to recover after being down two sets to love, ensuring the match was to progress to a deciding set. Yet once they got into the fifth, Saville produced more consistent baseline hitting, and leveraged his experience in making full use of the court to win rallies.

Although his serve suffered significantly in the windy conditions – both players secured service breaks to tie up the fifth set at 5-5 – Saville upped his game when it counted, forcing the error off Mousley’s racquet to finally secure a 6-4 7-6(2) 2-6 2-6 7-5 win.

Having won multiple Grand Slam junior titles, the South Australian reflected on his transition into the professional ranks and how he was coping with the higher standard of play.

“It’s tough. I’ve definitely found it tougher than I thought it was going to be. But now I’m in the 400s so hopefully I can progress into the 200s next year. It’s a long process,” he said.

“The average age of the Top 100 at the moment is 27. So I do have eight years to get there but I obviously want to try to progress a little bit earlier than that. It’s a tough sport. It’s a men’s game so I have to keep on developing so hopefully I can be there in a few years.

“The matches is a bit more of a grind. They’re a bit tougher. The guys are a bit bigger than the juniors. It’s harder to back up each match but I’ll work on that.”

Saville and Santillan are set to face each other in the quarterfinals as they each strive to secure the valuable wildcard on offer into the main draw Australian Open 2014.

“If I want to progress any further, I definitely have to pick up my game,” Saville said.

“I don’t know much about him (Santillan) but I’ll go out there and prepare like I always do and give it my best shot. I know he plays at a really high level, so tomorrow hopefully I can weather the storm a little bit.”