Jarmila Gajdosova was victorious in the most highly-anticipated match of the Australian Open Play-off so far, while Casey Dellacqua dropped just three games. 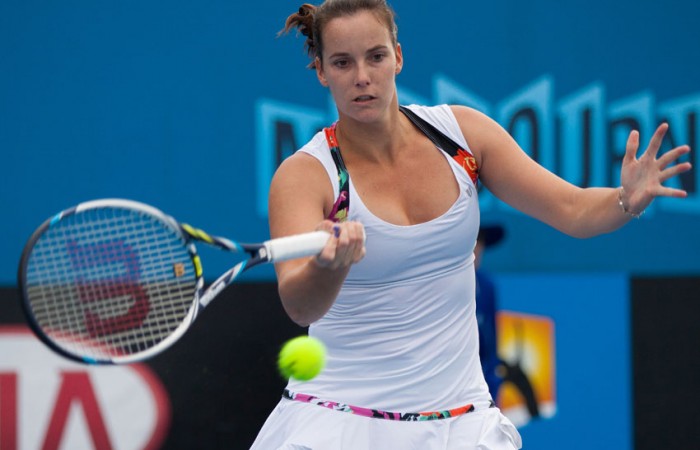 Jarmila Gajdosova was victorious in the most highly-anticipated match of the Australian Open Play-off so far, defeating Jelena Dokic in straight sets to progress to the quarterfinals.

She joined top seed Casey Dellacqua, who earlier cruised past Maddison Inglis 6-2 6-1 to secure her spot in the last eight.

“I started well but it’s nowhere near to how I wanted it to be or it’s supposed to be, but I have to start somewhere so I did,” Gajdosova said.

“There’s still a lot of work to be done but it’s the first match and I thought it was pretty solid at times; it looked somewhat like the old me.”

The 26-year-old, despite having played just one tournament since March due to a debilitating battle with mononucleosis, looked fit and sharp as she took to Court 6 at Melbourne Park against Dokic, who was playing her first competitive match in more than 18 months due to a wrist injury.

Their difference in match-fitness showed; Gajdosova was quickly up 2-0, finding the corners with her powerful groundstrokes while Dokic looked sluggish and error-prone.

Gajdosova rolled through the first set quickly but soon found herself down 3-1 as Dokic began to rediscover the relentless ball-striking and ambitious shot-making ability for which she is famous.

Yet the momentum swing was brief; the fourth-seeded Gajdosova reeled off five of the next six games.

She admitted to being extremely nervous heading into the match against an opponent whom she practised with during the week.

“It was horrible. But I think it’s good, I haven’t felt that for a very long time, and it shows that I guess I still care and want to do well, so you have to be nervous for it,” Gajdosova said.

Yet if she was feeling nerves, she didn’t show it; after seeing a match point slip by in the eighth game, Gajdosova stepped up to the line to serve for the match in the next game, and belted two aces and a winner en route to victory.

It was an even more dominant display by Dellacqua earlier on Tuesday.

Despite winning last week’s girls’ Australian 18/u Championships, Inglis was overwhelmed by the top seed, who in October and November won back-to-back $50,000 Pro Tour titles in Bendigo.

Dellacqua raced to a 6-2 5-0 lead, and although Inglis managed to get on the board in the second set, the match was over after the very next game.