The tennis world was given its first look inside the new Margaret Court Arena at the weekend as the iconic court was being prepared ahead of Australian Open 2014. 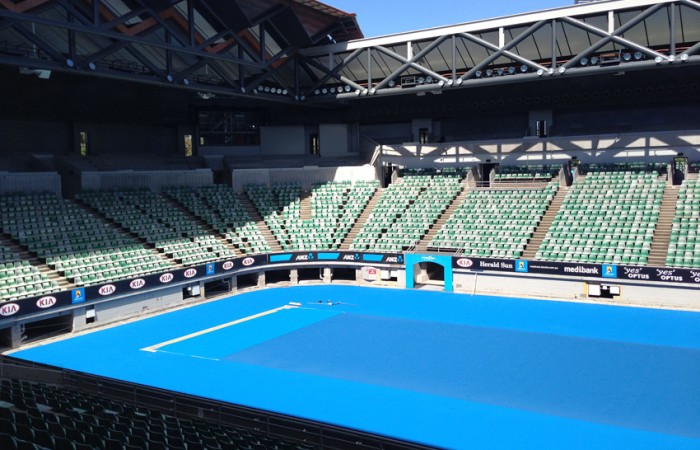 The tennis world was given its first look inside the new Margaret Court Arena at the weekend as the iconic court was being prepared ahead of Australian Open 2014.

The 6,000-seat show court, the scene of many stunning Australian Open battles, has undergone an incredible transformation and will sport a dramatic new look for the tournament in 2014.

Part of this new look is a distinctive roof – which will be fixed in an open position for the 2014 event and fully operational for Australian Open 2015 – providing fans with shaded seating areas.

Another feature is the space designated for an additional 1,500 seats in a new upper level, which will take the arena’s capacity to 7,500 for the 2015 tournament.

Australian Open tournament director Craig Tiley spoke with the media as the arena’s surface was being marked up with tennis court lines.

He said that construction on the arena was ahead of schedule and that once complete, Melbourne Park would be the only Grand Slam tennis venue in the world to boast three stadiums with retractable roofs.

“Granted, we’re not complete with the redevelopment, but we’re in great shape of having a lot more shade than (fans) have ever had before,” he said.

“We’re very lucky to actually get it back (this year) … In October next year we’ll get the arena completely returned to us, with the retractable roof and the extra seating, so by 2015 there’ll be another fantastic stadium.

“The Australian Open again, with the Victorian Government’s great assistance, will be leading the way globally.”