One versus two as Mousley, Bourchier reach 18s final

Top seeds and good friends Bradley Mousley and Harry Bourchier will battle it out in the final of the Australian boys’ 18-and-under Championships on Saturday. 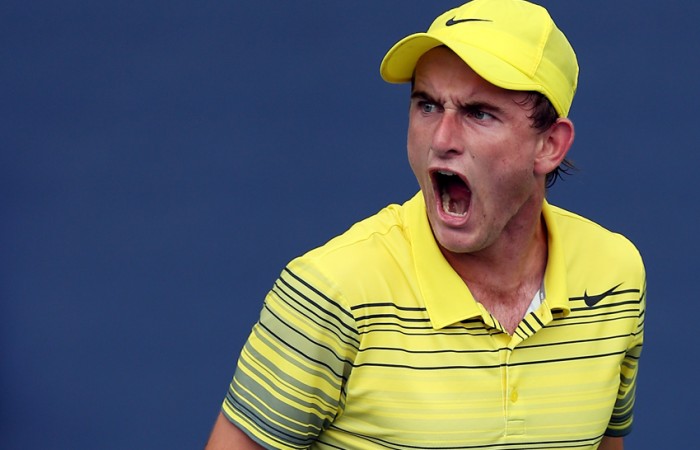 Top seeds and good friends Bradley Mousley and Harry Bourchier will battle it out in the final of the Australian boys’ 18-and-under Championships on Saturday.

Mousley, the top seed, subdued Akira Santillan in straight sets while Bourchier, seeded No.2, was forced to work hard for his 6-3 0-6 6-3 victory over third seed Marc Polmans.

It sets up a re-match of the pair’s battle at last year’s December Showdown, that time in the final of the boys’ 16s event.

Mousley revealed that he and Bourchier – who teamed in doubles at the US Open junior boys event in September and who share the same coach – had also been rooming together for the past month in Melbourne as they trained ahead of the Aussie summer.

“I might be moving out tonight,” Bourchier laughed in response.

“But we’ll see how it is (in the final) … It’s always tough (playing a friend), there’s always a bit of banter, but definitely looking forward to it.”

Bourchier will be especially pleased to be in the final after admitting he felt he had not been playing well for the past few months. And given the manner in which Polmans steamrolled through the second set, it made his recovery in the final set all the more impressive.

With Polmans engaging the Tasmanian in long, gruelling rallies from the baseline, Bourchier came out on top of a particularly lengthy one in the seventh game to claim a decisive break and a 4-3 lead.

With his forehand finding its mark, Bourchier forced errors from Polmans’ racquet to consolidate the break, and forced another error on match point with one final potent backhand to seal victory.

“I knew it wasn’t going to be easy to close out,” Bourchier said.

“I tried not to play into (his game style) it too much. I was just setting up the points to my advantage and then really finishing it off with my weapons … I set most of my points up with (my forehand) and used it as a finishing shot or making him make a forced error.”

It was an easier assignment for Mousley, who, not long after Bourchier clinched the win, followed suit with a brutal forehand winner.

The 6-4 6-2 triumph was a continuation of an impressive return to form for the top seed, who after dropping his first match of the tournament in the round-robin stage, has since been on a mission to avoid a similar lapse.

“My first day wasn’t too good. It was my first match back in a while from injury. I’ve kept trying to build my confidence, play with more purpose, use my feet a lot more and that’s when I play my best tennis, so I’ve done that a lot better,” he said.

In a battle of stylish one-handed backhands, Mousley came out on top, showing more variation and consistency on that wing while also producing a little more power behind his forehand.

Such a combination put the fourth-seeded Santillan under immense pressure, and he found himself forced into errors.

South Australian Mousley confidently held serve to love to claim the opening set, and cruised through the second stanza to ensure his appearance in the title match on Saturday at Melbourne Park.