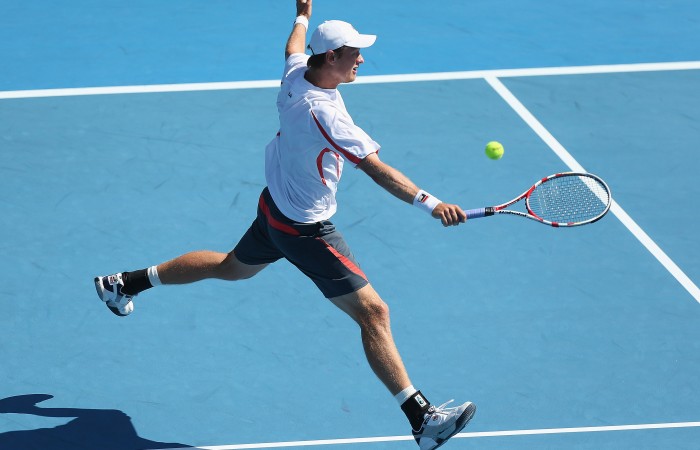 Top seed Greg Jones has been taken to the brink by fellow New South Welshman Blake Mott on Thursday at the Sydney Olympic Park Tennis International #1.

Jones eventually overcame an unlucky Mott, who watched as Jones clipped a net-cord winner at 5-5 in the final-set tiebreak to eventually run out a 4-6 6-3 7-6(5) victor.

Jones will next take on third seeded Adam Feeney, who bested Japanese sixth seed Yasutaka Uchiyama 7-5 7-6(4) before the high temperatures kicked in at Sydney Olympic Park.

The bottom half of the draw will feature a semifinal between seventh seed Jordan Thompson and No.4 seed Alex Bolt.

Bolt was tested in Thursday’s quarterfinal by Queensland’s Gavin Van Peperzeel; after two tight sets Bolt broke away in the third to come out a 6-7(6) 7-6(3) 6-1 victor.

Meanwhile, Thompson continued his exquisite form as he took down New Zealand second seed Jose Statham, 6-3 6-3. Thompson will be looking to capture his second Pro Tour title in a row after winning in Alice Springs two weeks ago.

The pair now have a combined 46 Pro Tour doubles titles and this week’s victory is their sixth as a pair.

Singles semifinal action kicks off at 11am on Friday at the Sydney Olympic Park Tennis Centre, with Bolt taking on Thompson and their match followed by the Jones-Feeney battle.

Although fourth seed Sachie Ishizu from Japan went down to Anett Kontaveit from Estonia, Aussie seeds Olivia Rogowska and Arina Rodionova shone through on a sunny day on Thursday at the Margaret River Tennis International.