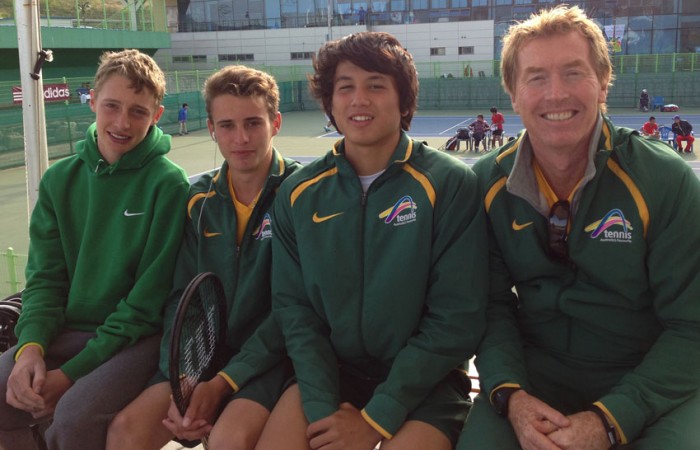 Australia’s rising stars will try to emulate the nation’s recent Davis Cup success in Poland when they compete at the Junior Davis and Junior Fed Cup by BNP Paribas world finals, beginning on Monday in San Luis Potosi, Mexico.

Mark Draper will captain the Junior Davis Cup side and Louise Pleming will head-up the Junior Fed Cup team.

Australia’s junior Davis Cup team is seeded sixth and sits in Pool C among No.4 seeds USA, Netherlands and Bolivia.

Our junior Fed Cup team are seeded second in Pool D and will face off against No.8 seeds Brazil, Slovak Republic and Nambia.

“Our girls have a reasonable draw and we are one of the teams with the most depth, will all players being [in the ITF junior] top 100,” said professional tennis operations manager Mark Edney.

“Our boys are placed in a good group and face the USA as their toughest opponent. Again, we have good depth and versatility through the line up.”

Since 1985, Australia has won Junior Davis Cup six times, most recently in 2009 and 2007, while the Junior Fed Cup has been won five times including in 2011, when Ashleigh Barty led teammates Belinda Woolcock and Brooke Rischbieth to victory.

Junior Davis and Junior Fed Cup by BNP Paribas is a prestigious international team event for boys and girls aged 16 and under.

Sixteen boys’ teams and 16 girls’ teams, from a total of 25 countries, have fought their way through tough regional qualifying competitions for a chance to compete in the finals. This year saw 173 teams from 96 countries battling to reach the finals.

The event begins with round robin competition, with nations being divided into four groups of four teams. The winners of each group qualify for knock-out semi finals, while the remaining nations go into play-offs and fight for final positions.

> check out the draws