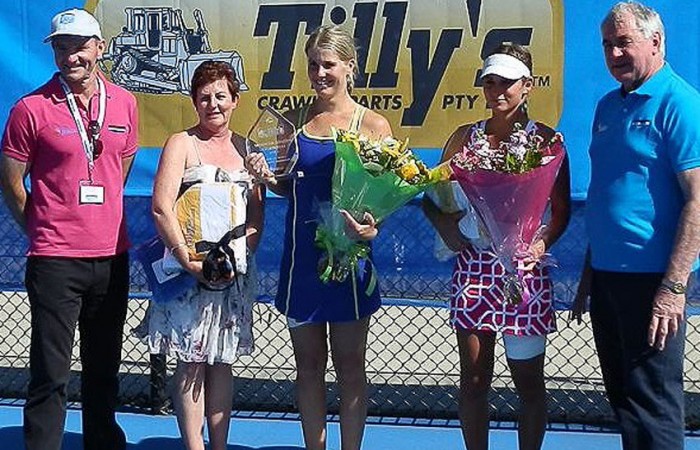 Brisbane’s Isabella Holland has won her second professional singles title after an astonishing comeback on an enthralling finals day at the 2013 Hutchinson Builders Toowoomba International.

Holland recovered from 6-2 5-4 down to defeat top seeded Slovakian Zuzana Zlochova in front of a vocal home crowd, saving two match points in the second set and also recovering from 4-0 down in the second set tiebreak.

Holland won her first title in Uzbekistan in 2011 but said the Toowoomba Pro Tour victory, which came by the scoreline of 2-6 7-6(6) 6-3, could be a turning point in her career.

“The last 18 months have been very difficult. I’ve battled many injuries and even took a complete break from tennis for a while,” she revealed.

“That is what makes today’s victory so special. My whole game feels really good now and I can’t wait for the rest of 2013.”

Sunday’s final win will improve Holland’s current ranking of No.1069 in the world to approximately 650th when the new rankings are released.

In the men’s singles final, Adam Feeney won the sixth professional title of his career after defeating Andrew Whittington in two tight sets.

Whittington raced to a 4-1 lead in the first set before Feeney rallied, the New South Welshman storming back to take the first set in a tiebreak.

Victorian Whittington once again broke early in the second set before deja vu struck; Feeney surged again to take the set – and the title – 7-6(6) 6-4.

Whittington was disappointed after falling in his second final of 2013.

“I would have loved to have won my first singles title here in Toowoomba. I was so close but Adam is very experienced and came over the top in the end,” he said.

For 28-year-old Feeney, a Pro Tour journeyman, it was a more pleasing week in the regional Queensland city.

“It’s such a good feeling to start the Australian Pro Tour swing with a doubles final and a singles win. I didn’t feel at my best in the early rounds but am very happy with my form in the semifinals and final,” he said.

“The win is a great confidence boost for me and I can’t wait to play in Cairns now too. I’d like to thank everyone in Toowoomba for such a brilliant event. It’s a pleasure to play in front of big crowds and I would like to thanks Hutchinson Builders, Tilly’s Crawler Parts and Toowoomba Regional Council for making the event possible.”

This week, the Pro Tour moves to Cairns for the men’s and women’s Cairns Tennis International.