Harry Bourchier has made it consecutive Australian Pro Tour titles, claiming his second Mornington title in as many weeks. 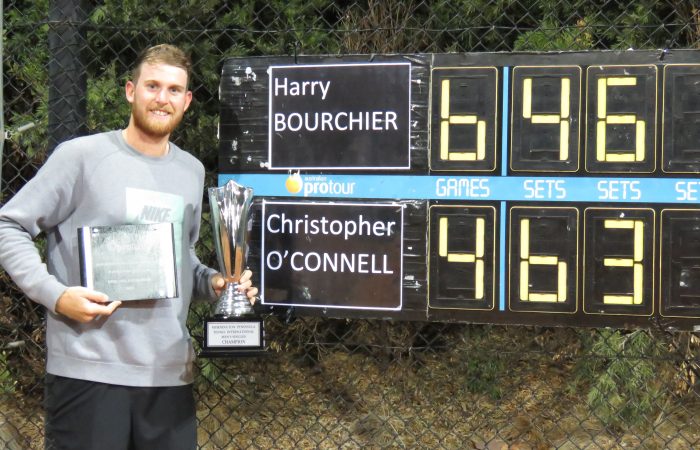 Tasmanian Harry Bourchier has claimed back-to-back titles in Mornington after being crowned champion at the Mornington Peninsula Tennis International #2 on Sunday.

The second seed, who last week won the event to claim his maiden Australian Pro Tour title, was once again too strong for New South Welshman Christopher O’Connell (No.5) in a repeat final.

Back 2 back 🏆🏆 thanks heaps to the real ones that are always there to help me out 👊🏼 #process #journey @yonex_com @ Melbourne https://t.co/elA340JqC4

Both men backed up from a semifinal played earlier on Sunday after rain forced play to be abandoned the previous day; O’Connell ousted top seed Jacob Grills and Bourchier defeated Rinky Hijikata, both in straight sets.

“It was pretty long day so I’m happy I got rewarded,” Bourchier, 20, said. “Chris played very well and it was a really tough match especially right after a close one with Rinky. He’s in very good form but I found a way in the end. I’m very happy with it.”

Bourchier, the world No.413, again showed his class against O’Connell in the final, taking the early lead, then fighting back after dropping the second set to pull ahead in the decider.

“I’ve been playing well the whole year and I’m taking that confidence into these sort of events,” Bourchier said. “After winning last week, I knew I had a good opportunity. It’s just about the belief that I know I can do it and back it up daily.”

In the doubles final, the Queensland pairing of Calum Puttergill and Brandon Walkin made it three titles in a row after besting Victorian Aaron Addison and Indian Karunuday Singh 1-6 6-3 [10-8].

The duo won in Mildura earlier this month before taking out last week’s event in Mornington.