Australia's six-year stint in the Davis Cup wilderness is over after Bernard Tomic secured victory against Poland and a return to the top-tier World Group. 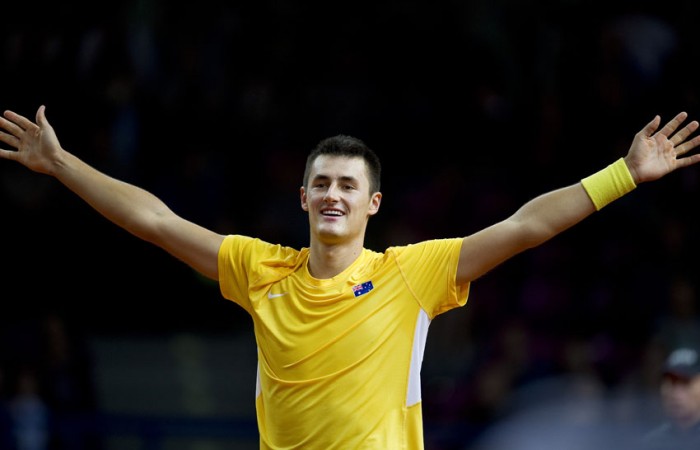 Australia’s six-year stint in the Davis Cup wilderness is over after Bernard Tomic secured victory against Poland and a long-awaited return to the top-tier World Group.

Tomic defeated Polish No.1 Lukasz Kubot 6-4 7-6(5) 6-3 in Warsaw on Sunday to give Australia an unassailable lead in the best-of-five World Group Play-off tie on clay.

It was Tomic’s second singles victory in the tie, after he and Lleyton Hewitt gave Pat Rafter’s side a 2-0 lead on Friday.

Poland hit back in Saturday’s doubles despite an impressive debut from Australian teenager Nick Kyrgios, who won a dead fifth rubber on Sunday after Michal Przysiezny retired early in the first set.

The 4-1 victory means Australia, 28-times Davis Cup champions, will return to the top 16 next year for the first time since 2007.

Rafter believes he has a squad capable of staying there, particularly with 20-year-old Tomic living up to his billing as Australia’s top-ranked player.

“Our team looks stronger and stronger when Bernard’s starting to play like that and the way Lleyton’s playing.

“You’d have to think if we get the right surface and a home match, then we can get back and stay in the World Group for a few more years.

“With Nick coming up and Thanasi (Kokkinakis), the next three or four years, it’s going to be a really strong team.”

Tomic improved his record in Davis Cup singles to 12-2 with wins over world No.70 Kubot and 113th-ranked Michal Przysiezny.

He also won both of his singles rubbers on clay against Uzbekistan in April.

“He always gets the job done,” Rafter said of Tomic, who suffered a disappointing second round loss to Brit Daniel Evans at the US Open.

“He came here with low confidence and he found a way to win these two matches.”

Tomic showed genuine fight against Kubot, coming back from 5-1 down to win the second set.

With Kubot and a vocal home crowd listing, the world No.51 won four straight games to level at 5-5 before prevailing in a tight tiebreaker, letting out a passionate scream as he converted his first set point with a winner down the line.

Tomic closed out the match comfortably before embracing Rafter and his Australian teammates.

Poland had extended the tie into a final day as Marcin Matkowski and Mariusz Fyrstenberg defeated Kyrgios and Chris Guccione in five sets on Saturday.

Tomic then finished the job and 18-year-old Kyrgios was 4-1 up against Przysiezny when the Pole retired with a stomach complaint.

Australia had reached the World Group Play-offs for the past three years – and in five of the past six – only to fall at the last hurdle.

But they were always in control against a Polish side depleted by the significant loss of world No.14 Jerzy Janowicz to a back injury.

Australia will learn their first 2014 World Group opponents on Wednesday.