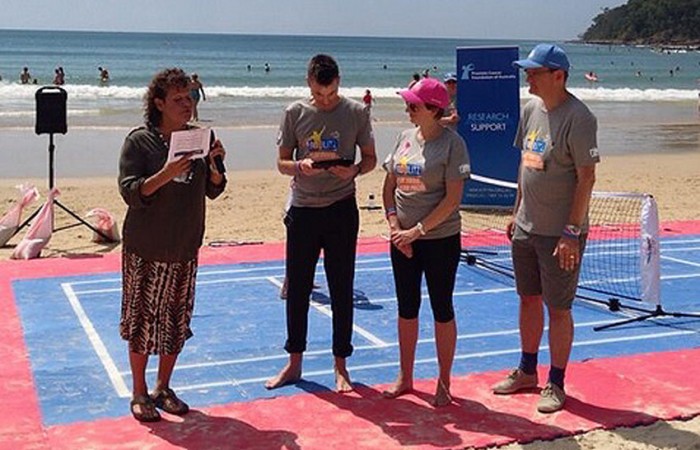 Tennis Australia also announced that they would match the first $10,000 of donations raised through the AO Blitz for these charity foundations.

People can donate at AO Blitz community participation days that are taking place around the country in the lead-up to the Australian Open, and from October online at www.aoblitz.com.au.

The AO Blitz, the largest participation drive in the history of Australian tennis, is considered a perfect fit for the two charity foundations, who work to raise funds in the community for cancer research and encourage supporters to maintain an active lifestyle.

This historic announcement was made on an appropriately coloured pink and blue tennis court at the AO Blitz community participation event on the Sunshine Coast’s picturesque Noosa Beach in Queensland.

“We are very proud to be supporting these two great foundations as part of the AO Blitz,” he said.

“The AO Blitz is best described as a Grand Slam-sized national participation drive that allows people who play tennis – and those who have never picked up a racquet – the chance to play tennis, win major prizes and have an Australian Open 2014 player represent their local town or community.

“Over the coming months we will be encouraging Australians in every corner of the country to not only get out and play tennis, but to help raise funds for the National Breast Cancer Foundation and Prostate Cancer Foundation of Australia at AO Blitz community participation events and from October online at www.aoblitz.com.au,” Tiley continued.

“The AO Blitz represents the first time Tennis Australia has joined forces with these two foundations on a major fundraising initiative, and we look forward to working together to encourage all Australians to lead a healthy, active lifestyle and of course, pick up a racquet and have a hit.”

Carole Renouf, CEO of the National Breast Cancer Foundation, said: “Research is increasingly demonstrating that exercise plays a vital role in both managing the risk of breast cancer and helping women with breast cancer, even those with advanced breast cancer. We are very pleased to be part of this initiative.”

Dr Anthony Lowe, Prostate Cancer Foundation of Australia CEO said: “We are pleased and proud to be partnering with Tennis Australia and National Breast Cancer Foundation on the AO Blitz. A balanced diet, exercise and reducing alcohol consumption reduces the risk of cancer. What better way to exercise than playing tennis with family and friends.”

Four-time Australian Open champion Evonne Goolagong Cawley, who attended today’s official partnership launch at Noosa Beach, said the all-new AO Blitz was an opportunity for Australians of all ages and tennis abilities to get involved in the sport

“Australia is one of the world’s great tennis-loving nations and throughout the AO Blitz we want to see more people than ever before dust off their racquet and play tennis to keep fit and participate in the online challenges,” she said.

From October, participants around the country will be encouraged to take on a series of tennis-themed challenges to earn points and win prizes. At the end of the AO Blitz, the 256 towns around Australia with the most points will be represented on court at Australian Open 2014 by one of the world’s leading players.