Australia's success on the doubles court has continued at the US Open with Ash Barty, Casey Dellacqua and John Peers all moving into the quarterfinals. 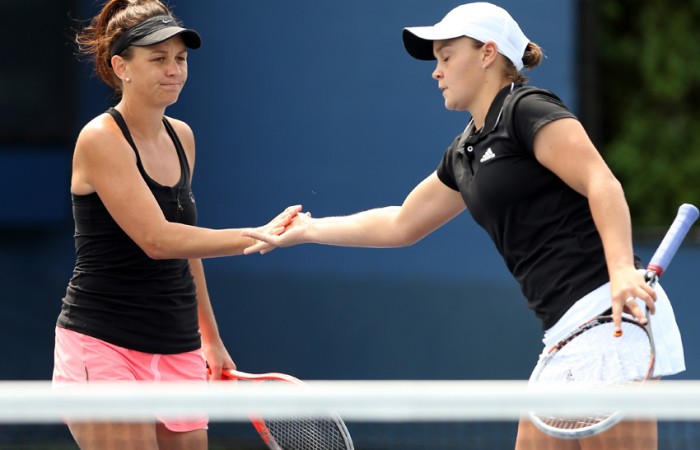 Australia’s success on the doubles court has continued at the US Open with Ash Barty, Casey Dellacqua and John Peers all moving into the quarterfinals.

Barty and Dellacqua, the eighth seeds in the women’s doubles, won their third straight-set match in a row, brushing aside No.9 seeds Liezel Huber and Nuria Llagostera Vives.

It continues a run of form that saw the pair reach both the Australian Open and Wimbledon finals in 2013, and win the WTA title in Birmingham in June.

In the last eight, the Aussie duo will face the winner of the match between second seeds Ekaterina Makarova and Elena Vesnina, and 13th seeds Cara Black and Marinka Erakovic.

Peers and Murray have enjoyed much success in 2013, combining to win ATP titles in Houston and Gstaad.

Their quarterfinal opponents will be either the second-seeded duo of Alexander Peya and Bruno Soares, or the Uruguayan-Argentinian team of Pablo Cuevas and Horacio Zeballos.

Meanwhile, Barty and Peers combined well in the mixed doubles at Flushing Meadows, upsetting top seeds Anna-Lena Groenefeld and Peya before falling in the second round to Czechs Lucie Hradecka and Frantisek Cermak – the French Open champions and Australian Open finalists – in two tense tiebreaks on Saturday.