Bernard Tomic says he's building in confidence for Wimbledon after surviving a lapse in concentration to reach the Eastbourne ATP quarterfinals. 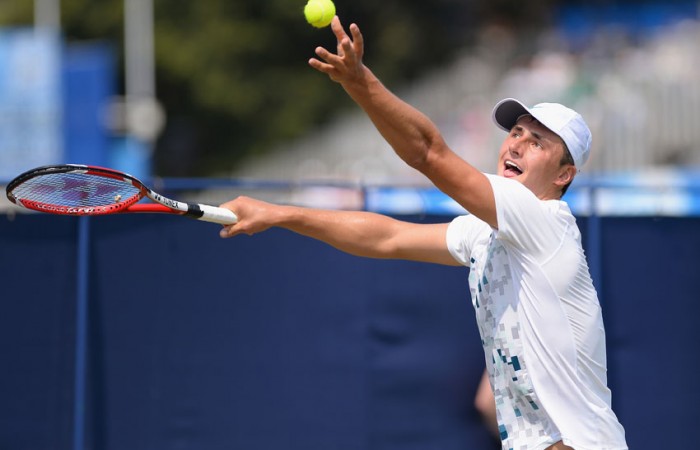 Bernard Tomic says he’s building in confidence for Wimbledon after surviving a huge lapse in concentration to reach the Eastbourne ATP quarterfinals.

The Australian world No.64 admits he got ahead of himself in relinquishing a huge lead before grinding out a 6-2 5-7 7-6(4) win over Frenchman Julien Benneteau at the grasscourt event on England’s south coast on Wednesday.

After winning his first match in almost two months on Tuesday, the 20-year-old looked to be coasting towards another impressive victory when he raced to a 4-1 lead in the second set.

However Tomic admitted to losing focus as 32nd-ranked Benneteau fought back strongly to claim the second set with the match decided in a tense third-set tiebreak.

“I thought I’d (already) won the match and took my foot off the pedal,” Tomic said.

“Then before you know it, he’s down, he goes for his shots, he’s relaxed and he breaks you. Then he gets the firepower to play and from there he started playing ridiculous.

“Some of the volleys he was making were probably some of the best I have ever seen, no doubt about it. Being up a set and 4-1, I should have won it comfortably, but I’m lucky and somehow I pulled it through in the end.

“Obviously I have learned something today, as well, that I need to focus more when I’m winning.”

“I’m gaining a lot of confidence,” the 2011 Wimbledon quarterfinalist said.

“A match like this in the third set is huge to play, especially before a Grand Slam.”