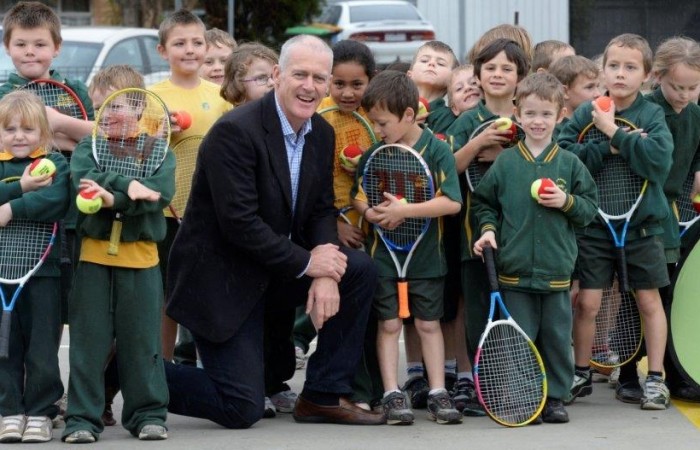 Fitzgerald, a TA board member, is the MLC Tennis Hot Shots Tennis in Schools ambassador.

‘‘This [MLCTHS program] is the biggest thing we’ve done in tennis in decades,’’ Fitzgerald said.

‘‘Coaches are also adopting this program and they’re running it at club level then it cross-pollinates into the school programs, so the kids from here who learn it in school hours go and play it there.

‘‘It’s easy to play, so it gives the kids a first-time experience that’s really enjoyable and they come back for more.’’

Fitzgerald, whose daughter Elizabeth teaches at Shepparton High School, said there were already more than 80,000 children across the country registered in the Hot Shots program.

‘‘All of TA, from the CEO down, is pushing this as one of our major goals to really take the game to the masses,’’ he said.

‘‘We haven’t done it well enough over the last 20 years, but we’re now doing it.

‘‘It’s a little late, but thank goodness we’re doing it and the results so far have been incredibly quick — it’s really exciting.’’

Fitzgerald, who grew up in small South Australian town Cockaleechie, said he enjoyed mixing with the Murchison students.

‘‘They were a good bunch of kids and well behaved, too,’’ Fitzgerald said.

‘‘They asked great questions and some of them had some tennis knowledge.

‘‘I grew up in a place a lot smaller than Murchison … so I can relate and they were interested and I bet some of them can play a bit.’’

Fitzgerald said it was vital for TA officials to develop programs to bolster the sport in this country to help compete against the roughly 200 nations in the game.

He was also thrilled with the success of Australian teenagers Ash Barty and Nick Kyrgios, who won their first matches at grand slam level at the French Open this week.